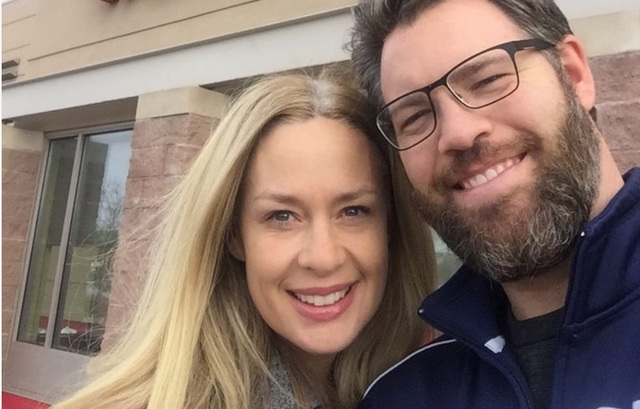 "You never think something you write on a whim on Facebook before going to sleep will change your life, nor be read by an estimated 100 Million people in less than a week, and end up landing you as front page news in London, China, India, Brazil, Italy, France, and every major U.S. city," Jason Hewlett writes on his website.

But it did. A simple post Hewlett wrote about seeing his wife in a Target check-out line got him the title of "the husband who broke the internet" from The View, not to mention a feature on The Today Show, Huffington Post, and Business Insider.

"My name was trending higher than Kim Kardashian’s the day she and Kanye West had a baby," Hewlett shares.

At first, the post seemed to bring fame and only good news. "Stories of couples rekindling their love, seeing one another with 'fresh eyes,' my wife and I stayed awake for most of 100 hours reading heartwarming comments of love, adoration, devotion promised to those we see every day as a new and fresh start among couples and families, stories of redemption among estranged lovers, children and parents, it was beyond description incredible," Hewlett writes.

Hewlett's wife even wrote a beautiful response on Facebook and the two posted a video together.

But then the negative flooded in, with "softball lobs questioning my intentions to downright attacks on our faith, love, and then the private messages for us to die or be struck with catastrophe."

"Truth of it all is this: I have no idea how to create something like that ever again. I actually hope it never happens again for most reasons, but sometimes things we share just happen to strike a chord. But what it solidified for us was the importance of the overall message of the post—it was The Promise. It became my main message, the proof I needed that the world was and is thirsty for people to Keep a Promise although we always assume the worst when we use words like “cheating” or 'wandering eye.' It proved to me that I have a message that is quite important to share. And there are people that loved it, couldn’t get enough of it, couldn’t believe it, and there were those that couldn’t stand it. I get it. But it led to a wonderful realization, not as to HOW it went viral, but WHY."