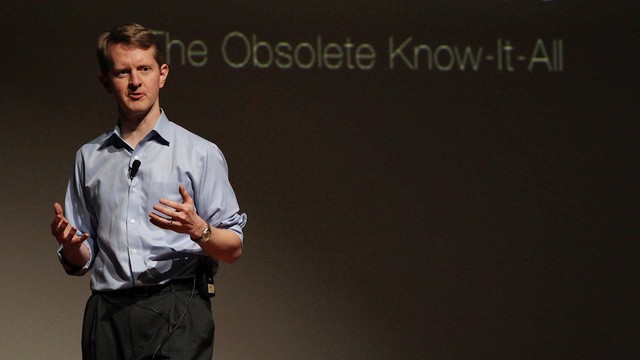 In a 2013 TED Talk at Seattle University, Ken Jennings says it was always sort of his destiny to end up on the trivia game show Jeopardy!

Jennings says prior to his 74-consecutive wins in 2004, the longest in the show's history, he was "pretty deeply in the trivia closet," always finding new bits of information that were very interesting to him—but not always as interesting to others.

"If nothing else, you realize pretty quickly as a teenager that it is not a hit with girls to know the Captain Kirk's middle name," Jennings quips.

But with so much information know available online, Jennings discusses the value of acquiring knowledge like this could be depreciating.

In 2011, the trivia master faced off with his most formidable trivia opponent yet—a supercomputer named Watson.

"I thought, well, this is going to be child's play," Jennings says. "Yes, I will come and destroy the computer and defend my species."

But the computer built by IBM beat Jennings in a contest of Jeopardy! trivia.

After this experience, Jennings began researching how relying on technology affects the human brain and began wondering how the acquisition of knowledge is valued in today's society, where nearly every question can be answered with a quick search on the internet.

"I came to believe there were two advantages that those of us who know these things in our head have over somebody who says, 'Oh yeah, I can Google that, hold on a second,'" Jennings says. "There's an advantage of volume and an advantage of time."

The advantage of volume allows people to make more informed decisions, Jennings says. The advantage of time allows us to act on what we know quickly, as Jennings pointed out with the story of Tilly Smith, who saved her family and many others using her knowledge of geography moments before the 2004 tsunami swept through Thailand.

Even when so much information available at the touch of a button, Jennings says in his Ted Talk that there will always be value in acquiring knowledge.

"I have always believed that the things we know, that knowledge is an absolute good," Jennings says. "That the things we have learned and carry with us in our heads are what make us who we are as individuals and as a species. I don't know if I want to live in a world where knowledge is obsolete."