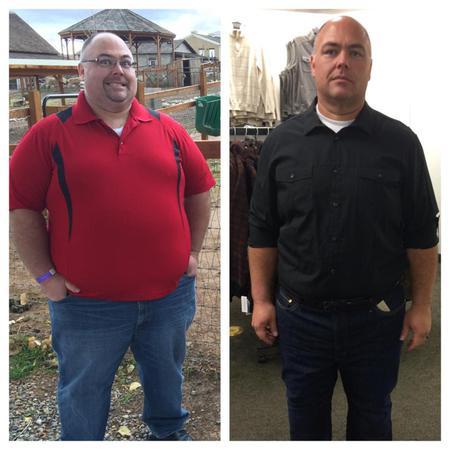 LDS Man Loses 147 Pounds on A&E Show: How His Faith & Unexpected Friendship Helped Him Do It

An LDS trainer and LDS participant on A&E's new weight loss show, "Fit to Fat to Fit," found that their mutual faith was essential in their journey to lose weight together in front of a national audience. Trainer JJ Peterson had to first gain weight in order to then lose it again with Ray Stewart, his client and friend.

When JJ Peterson first walked into Ray Stewart’s Spanish Fork home in February 2015, he looked for clues indicating that the two men shared the same LDS faith. It didn’t take Peterson long to spot a copy of the Book of Mormon.

“There was part of me that said, ‘Yes, … I can talk to him about things that are extremely important that everyone should know and realize,’” Peterson recalled. “Just being a child of God, your innate and divine potential, you have to be able to live up to that. It was super powerful to be able to use stuff like that throughout Ray’s transformation.”

Peterson, a personal trainer, and Stewart, his new client, were meeting for the first time as participants on A&E's new weight-loss show, "Fit to Fat to Fit." The show is based on a book written by Drew Manning who in 2011, while working as a personal trainer in Utah, intentionally gained 70 pounds to better understand the struggles his clients faced amid their efforts to lose weight.

Peterson and Stewart, who live just over a half-hour away from one another, had never met, but the two members of The Church of Jesus Christ of Latter-day Saints instantly felt a bond.

“He was such a good-looking guy,” Stewart said, laughing when asked about his first impression of Peterson. “But at the same time, my first impression was just his smile. Something felt so familiar about him. It was like while meeting him for the first time, I had known him for years. It was one of those powerful moments in life where you know this is someone the Lord put in my path.”