Two LDS teenagers, Tyra Orgill and Sander Morrison, who make up the music group Enliven, shared a touching music video Friday in support of 13-year-old Leah Paul, who suffered a brain injury last August during a surgery to remove a tumor.

“The surgeon had to perform an emergency craniotomy, where a very large section was cut out of her skull to relieve the pressure -- leaving her with nearly 50 staples in her head. Soon after the surgery, Leah also suffered a stroke which has left her right side mostly paralyzed,” according to a GoFundMe page. 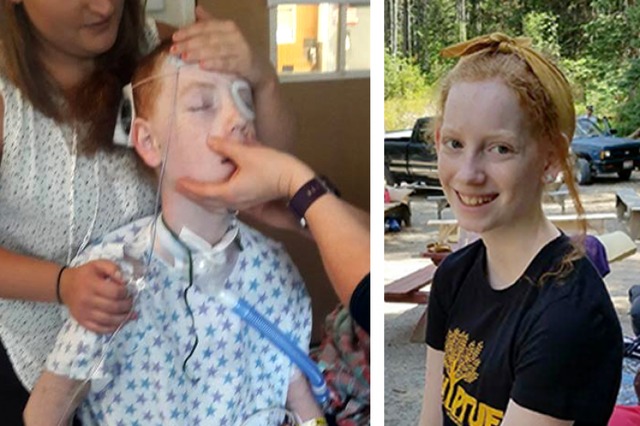 Photo of Leah Paul from GoFundMe

Leah stayed in the hospital for four months due to the complications and has had to begin re-learning all of the basics, such as walking, talking, and swallowing. She was brought home around Christmas of 2016 and is continuing to go to therapy and doctor appointments. Her parents are very overwhelmed with the challenge but are grateful for the help they have received thus far.

"We have a long road ahead of us,” said Erika Paul, Leah’s mother. “I am so grateful for loving family, friends, and neighbors who have chosen to travel down this road with us. . . .We truly believe these miracles would not have happened without the faith and prayers of our loving support group. We are so thankful for each one of you."

Orgill and Morrison wanted to do their part in helping Leah by creating awareness for her recovery through this incredible music video:

Orgill and Morrison met in their school’s orchestra class and after realizing their similar taste and style in music, they began playing together for various occasions. Six months after meeting, the two have now arranged several songs together and have given themselves the name “Enliven” because of their desires to enliven and inspire others through music.

Both Orgill and Morrison have long been involved in music and have incredible talent in multiple instruments; Orgill has also been composing music for three years. They feel part of their mission in life is to create music that stirs hearts and helps people feel closer to God.

Another one of Enliven’s beautiful arrangements is the following combination of “Come, Come Ye Saints” and “Homeward Bound,” created to share a message of hope in life’s struggles.

Appropriate to their mission, Orgill and Morrison feel a quote from Corrie Ten Boom matches this arrangement's message: "It is not as much what happens, but how we take it that is important. God is watching to see whether we allow the problems to defeat us, or whether we will go through them in His strength . . . everything that happens to us in life is training for the work we will do next."

Lead image a screenshot of video.