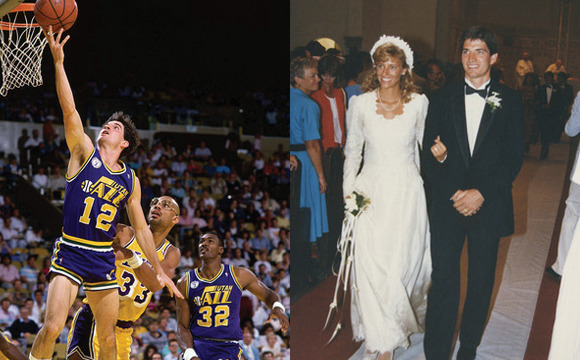 What is it about NBA legend John Stockton that Mormons love so much? This story's popularity alone helps prove our point that people just can't get enough of this faithful, former Utah Jazz star. Members are certain to respect Stockton for his devotion to his Catholic faith and to his family. He left the NBA after 19 seasons with the Utah Jazz, holding a massive assist record, including the career mark (15,806). He also twice led the league in steals—with a career total of 3,265—and retired as the NBA’s all-time leader. To learn more about Stockton and his record-breaking career, grab his new autobiography Assisted at any Deseret Book store or deseretbook.com.

This is a very interesting piece that highlights all of the good teachings that the Church brings to the Navajo people. One of the most interesting aspects of the story is that it illuminates just how much the Church is expanding in the reservation areas--and how much other churches' memberships are diminishing. The Navajo members of the Church in Arizona are grateful for the new lifestyle and the faith that the gospel brings them. They say they aren't abandoning their native Navajo roots, but rather that they are reconnecting to them.

3. The Church Celebrates "A Century of Honor" with the Boy Scouts of America

A century ago, The Church of Jesus Christ of Latter-day Saints became the first organization toformally sponsor Scouting troops for its youth. Who knew this relationship would last this long? In honor of this anniversary, the Church held a rather elaborate celebration in the conference center.

The program included demonstration of scout skills, including the rappelling from the ceiling shown here.

The program was broadcast to Church meeting houses across the United States, but if you missed the rappelling, zip line, and President Monson receiving The Honor for saving a girl’s life when he was 12, not to worry! Catch the written recap and photo gallery, or if you have more time, you can still watch and share the entire once-in-a-lifetime production:

Anticipating a special session of the Hawaiian state legislature that could potential legalize same-sex marriage in the islands, church members in the state were encouraged to learn about the proposed act and to take action in a letter read by local leaders. Among other things, the letter stated that the Church urges those involved in the legislation "to educate yourselves on these matters and to let your voice be heard through the democratic process." The letter also clearly stated that the Church's position on same-sex marriage remains unchanged.

Though many other religious denominations including the Roman Catholic Church, the faith-based Hawaii Family Forum and Hawaii Family Advocates support the same side as the LDS Church, there has been a lot of controversy and contention. Even popular writer Orson Scott Card has been attacked for his stance on the issue, with many threatening to boycott his film, Ender’s Game, which was just released on November 1st.

5. Boise High-Rise Design Changed Because It Looked "Too Mormon"

A downtown Boise high-rise is on schedule for modifications after the owners evaluated concerns expressed by local citizens that the building looked too much like a Mormon temple. The mayor's office received three complaints about the appearance of the building, and comments on social media also cited a possible religious influence.

Changes to alter the spire will be small enough that no further approval from the city Design Review Committee will be necessary, and the building, which is already mostly leased out, is still on track to open in January.