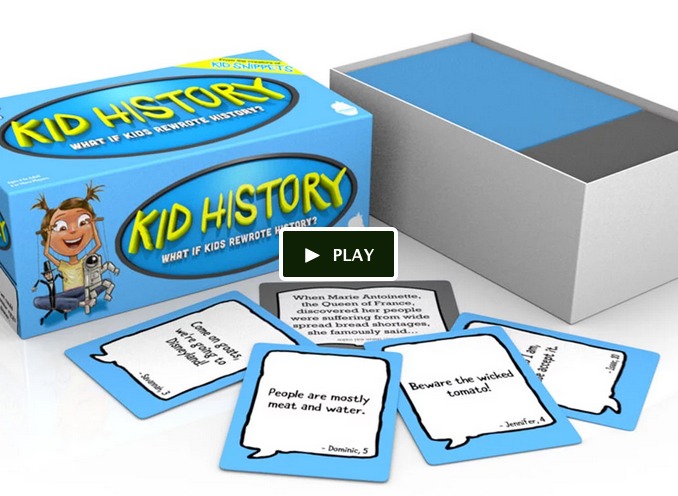 Thanks to UV360 for pointing out this fun game!

If you love the hilarious videos made by the LDS family behind Kid History, or the hit FHE game Apples to Apples, you'll love the latest brain child of Board Shorts TV: a new board for families. The game, called Kid History: The Party Game, starts with a historical scenario (so not only is this game fun, it's educational!). Each player then plays a car with a quote on it to match the historical context--often to hilarious effect.

To launch this new game, Board Shorts TV has launched a Kickstarter campaign, where you can participate for as little as $5, or buy a copy of the game for $25. For a little more, you can have one of your kids' quotes included in the game, or even appear on a future episode of Kid History on YouTube (which would put you among other stars that have appeared on the channel, like Lindsey Stirlingk and even Josh Groban).

At the time this story was published $13,357 of its $20,000 goal had been raised. "Our manufacturer is ready to go and just waiting for us to say the word," assures the team behind Bored Shorts TV.

"We’ve had so much fun creating these videos," shared John Roberts, one of the founders of the channel, "that we decided it would be awesome if we could bring that same experience that we have on set to people in their homes." The channel says, "Our mission is simple, create a fun game that you and all your friends enjoy."

Learn more about the Kid History board game at kickstarter.com