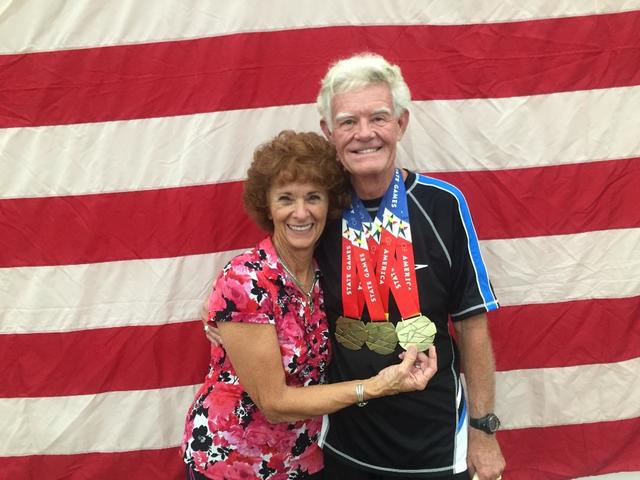 It can be hard for members of The Church of Jesus Christ of Latter-day Saints to find ways to put the gospel, callings, church, family, and things that matter most before other things that grab for our attention.

Such isn’t the case, however, for Dick Johnson of Idaho.

Johnson, 79, is currently a world-renowned pickleball player. He is a national and world champion who has only been playing the sport for six years. He continues to travel around the country to challenge opponents in state, regional, national and world tournaments and competitions. Even at his age Johnson still, more often than not, finds himself walking away from the competition with a gold medal. 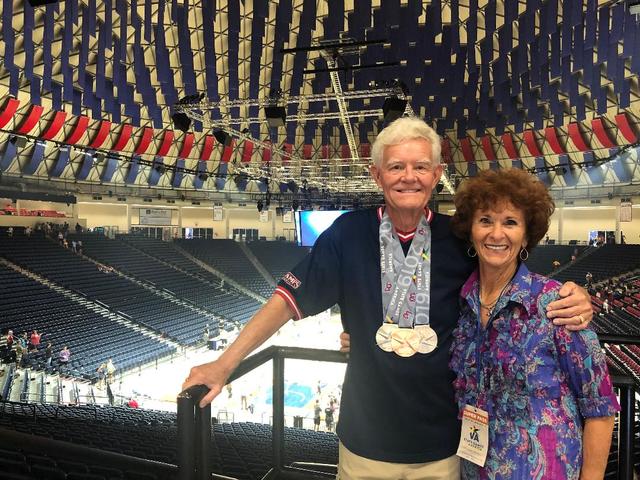 Dick Johnson and his wife, Lawana, pose with his medals at the Lynchburg Stadium in Virginia

Putting the Lord first, before something like pickleball, is something that Johnson learned relatively early in his life.

“Sports have always been important to me,” says Johnson. “I just love the competition of sports and the relationship with other people that you get to meet and learn about as you play. I’ve just loved sports all my life and tried to fit them in as I’ve grown older into business, family, church, and career and all of that.”

Johnson grew up playing all types of sports, such as basketball, baseball, and tennis. As he grew older, however, he became particularly fond of tennis. After winning multiple state championships as a tennis star, Johnson needed to decide shortly after high school graduation if he wanted to pursue a tennis career at the collegiate level or if he wanted to place education and sports on hold to serve a full-time church mission.

A decision was made. Rather than accepting an academic scholarship from the University of Colorado and a very likely tennis scholarship, Johnson chose to serve the Lord and go on a two-year mission, knowing full well that the scholarship wouldn’t be available when he got back.

“Best decision I’ve ever made in my life,” says Johnson. “No question.”

That decision to forego the scholarships and to serve a mission acted as the foundation for Johnson’s life to always look back on and remember that the Lord comes first. If he did it then, he could do it all the time.

A similar choice was presented to Johnson after he returned home from his mission. While attending BYU, he had many chances to join the tennis team. However, at 22 years old, Johnson got called into his first bishopric and chose to focus on that rather than chase another tennis scholarship.

“I gave up the shot at the tennis scholarship on the tennis team . . . another great decision,” says Johnson. “The gospel has just always been the priority. That’s just the way it’s been.…Church callings have always come first. That usually meant giving up other things that were not as spiritually important and of much lower priority.”

► You may also like: Latter-day Saint Named "World's Fittest Teen" by CrossFit + How He Lives His Faith

Even though Johnson has made it a point to always put the Lord and His church first, that doesn't mean the road has been easy for Johnson. Like everyone else, difficult times arose—and the gospel wasn’t the only thing that helped him get through the tough times.

“I had back surgery that put me out of [tennis] at about age 50, and I didn’t do much in sports for about 20 years. We went down to Arizona shortly after I retired at about 65, and that’s when I found pickleball. I also had a pretty severe diabetic problem at the time, and those two things together, finding pickleball and finding a solution to my diabetic problem, kind of revived me physically and allowed me to get my health back in gear. I’ve just enjoyed it ever since. I’ve been playing for about six years now…. You can play [pickleball] recreationally or you can play it competitively. That’s part of the reason it’s become so popular. I love to compete, so that’s been a big draw to the game.” 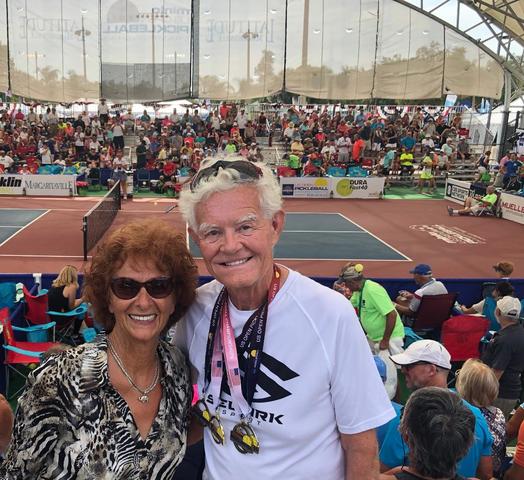 Dick Johnson and his wife, Lawana, at the US Pickleball Open

With all of the praise and media attention that pickleball has brought Johnson, he uses the sport as a platform to be a good example to those around him.

“One of the things that [my wife and I] have loved the most about gaining some kind of notoriety and success in the sport is that it’s opened up great missionary opportunities throughout the world as we’ve gone to these various world and national tournaments,” says Johnson. “My wife and I always make it a point in our conversations to bring up the Church and the gospel. We’ve been successful in that missionary work with people, and that’s probably been the most meaningful thing to us as we look back on it now as anything we’ve done in the sport. It’s just been a blessing to us to be able to do that and tell them about the gospel, tell them about the Church. Many of them don’t know a thing about the church.”

Although Johnson has only really been involved competitively in pickleball for six years, he has wasted no time making his appearance on the big stage. Some of his accolades include medaling at the State Games of America and the Senior World Championships, winning the 2018 Male Player of the Year Award via Pickleball Rocks, earning a gold medal at the pickleball US Open, being awarded the 2018 Personal Best Award by the National Senior Olympic Games, and winning over 200 medals (mostly gold) in 104 sanctioned tournaments across the world. He was also chosen by the National Senior Games Association to be featured in a CNN health newsletter report earlier this year along with 10 other athletes. 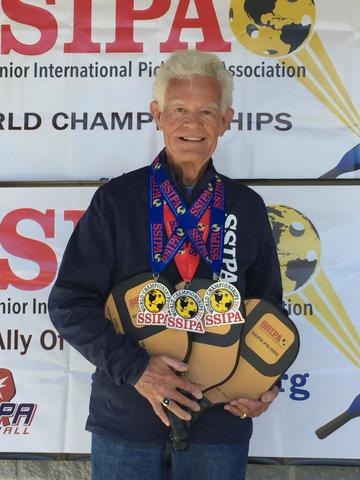 Amidst all the awards and prizes Johnson has earned during his short pickleball career, he is still able to keep everything in perspective. At age 79, his life stands as a testament to how we as followers of the Lord Jesus Christ are to serve and live. Johnson has served as a part-time seminary and institute teacher for 15 years, among many other church callings. His life has been dedicated to serving the Lord before anything else, something Johnson doesn’t plan on changing anytime soon.

“Turning to Heavenly Father for assistance in prayer is vital to getting the direction and guidance you need for whatever problem or question you’re facing. Then being willing to sacrifice your time, your energy, your finances, and whatever else it is to serve your hardest in your callings is very, very important. . . . If we serve hard the Lord helps us in them and blesses us more than we give. It’s just how it works.”

Lead image of Dick and his wife, Lawana, after he won several golds at nationals. All images courtesy of Dick Johnson.