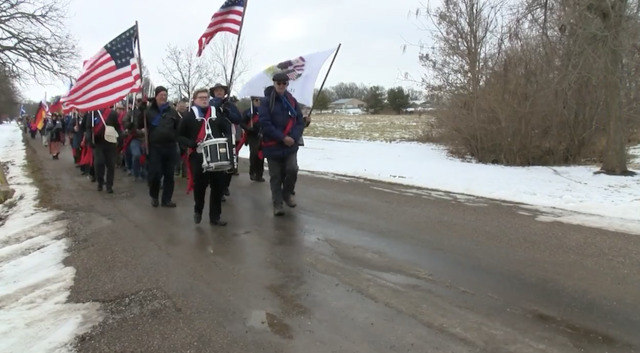 174 Years Ago, Pioneers Left Their Homes in Nauvoo. Here's How Latter-day Saints Are Honoring Them Today

It’s been 174 years since the pioneers left their homes in Nauvoo, Illinois, and began the trek west in search of religious freedom.

On February 1, 2020, hundreds of Latter-day Saints in Illinois retraced a few of those steps to the Mississippi River where the pioneers first departed on their journey, reported WGEM, a radio station in Quincy, Illinois.

"I think it means a lot to us, it's great we can be in a place where we can worship how we want to and not have to face the persecution that the pioneers had to as well," said Jeff Gabel, a Latter-day Saint from Cedar Falls, Iowa.

The pioneers began leaving Nauvoo in February 1846 under the direction of Brigham Young. Although the prophet originally proposed that the group leave in spring, due to threats and other persecutions, the Saints began the trek earlier than planned. Approximately 3,000 Latter-day Saints and 500 wagons were in that first company, according to ChurchofJesusChrist.org.

► Related Content: The Miraculous Discovery in a Non-Member's Home That Helped Rebuild the Nauvoo Temple

"They were seeking safety and religious freedom," he said. "They ended up colonizing many places in the west, and Nauvoo is a monument to that."

READ THE FULL STORY AT wgem.com.