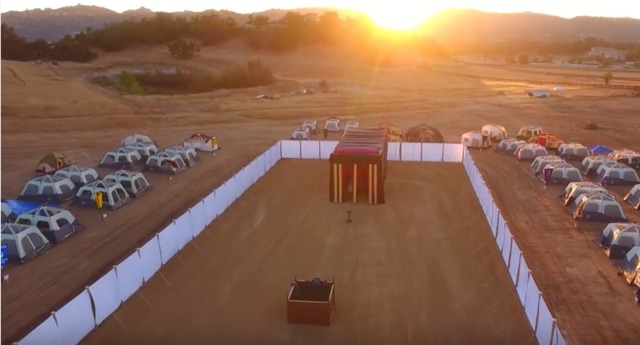 LDS Stakes Build Life-Sized Ark of the Covenant & Tabernacle, Give Tours to Other Faiths

The Murrieta and Huntington Beach Stakes went old school to bring the scriptures to life—as in Old Testament old school.

It all began when the stake president for the Huntington Beach Stake, Rick Johnson, saw the Meridian Idaho North Stake's Old Testament tabernacle replica in August of 2015.

After speaking at an event for the tabernacle and witnessing the effect the Old Testament replica had on the youth in Idaho, President Johnson decided the same could be done for his stake as part of a youth conference in California the following summer.

There was just one problem—finding enough land to build the tabernacle on. With limited options for purchasing any real estate in the area, it seemed almost impossible to build a structure as large as a tabernacle and support a youth conference in the same area.

After meeting with President Johnson, the Murrieta member offered to purchase 20 acres of land on which the full-sized tabernacle replica could be built in Murrieta, California.

With the land secured, work began on making the area ready for the youth conference. The ground was leveled, an amphitheater was built, and the gravel for a parking lot was laid out. Palm trees were even planted around the perimeter to give the area a more authentic atmosphere.

Members of the Huntington Beach Stake were then in charge of constructing the tabernacle, complete with the altar of sacrifice, the altar of incense, the lavar of water, the menorah, the table of showbread, and the ark of the covenant replicas.

But how could members construct a life-sized, Old Testament tabernacle replica without blueprints or pictures to guide them? They turned to Old Testament expert Donald Parry who gave them insights as to what the tabernacle and its furnishings might have looked like.

"He [Parry] said, 'But, we want you to go the scriptures, get on your knees and figure it out.' And they did that. And it was a neat experience for them," President Johnson says, adding that he heard that one of the members was struggling with how to put the altar of incense together, but when he woke up the next morning, "it had all been laid out." 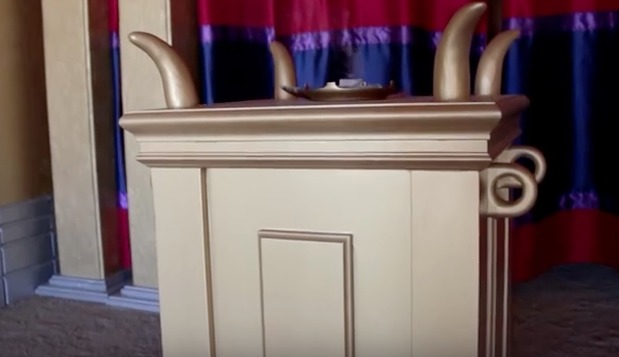 And the youth were preparing as well. About 20 young men and young women were instructed to share three different lessons, one each month for the next three months, to the youth in the wards of the Huntington Beach Stake in preparation for the youth conference.

Once the tabernacle was completed and the youth conference began, the youth were split up into 12 groups to symbolize the twelve tribes of Isreal and camped around the tabernacle.

For two days, the youth participated in classes and activities that taught about the tabernacle and its symbolism.

But they did not enter the tabernacle until the third and last day of the youth conference, combining with the Murrieta Stake youth to receive their tour of the tabernacle.

"It definitely opened their eyes," says second counselor of the Murrieta Stake presidency, Tony Morris. "They learned things about their religion that were taught to them last year in seminary... and then to get out there and see an exact replica—I mean the size and everything—I think it made it more real for them. It gave them a deeper testimony and it helped them make connections to the temple. That was really key."

But the tabernacle was not done yet. With permission from the Huntington Beach Stake, the Murrieta Stake opened up the tabernacle to guided, public tours the following Monday.

Unsure of how many people would attend, director of public affairs for the Murrieta Stake Mark Wright says organizers would have been happy with 60 people per night and two tour guides, one of which was Parry. But as the word spread through social media to the surrounding stakes in the valley, 60 turned into around 800-1,000 people per night with 10–12 tours and three tour guides.

"It was just amazing to see what Heavenly Father did with the event and how it was so different from what we anticipated it was going to be," Wright says. "I think it brought the LDS community together in this area and it really did a lot in regards to interfaith outreach."

Wright says city officials, including the mayor of Murrieta, attended the event. He also estimates that about 400–800 people from different faiths toured the tabernacle, some of which admitted they didn't know Church members believed what was taught in the Old Testament.

After four days and more than 3,000 visitors, the tabernacle was packed up into containers and sent to the Huntington Beach Stake.

But there will be more tabernacle tours in the future. The Huntington Beach Stake is hosting their own tabernacle tours November 8–12. President Johnson says they plan on setting up the tabernacle in one of their parking lots to accommodate the event.

This time, the youth will lead the tours and reinforce what they learned at youth conference.

And if the impact the tabernacle had on the community and church members while it was in Murrieta is any indication of how it will do in Huntington Beach, there could be even more visitors who attend and learn about the Church.

"I think it [the tabernacle] really shifted some paradigms, helped people think differently about who we are," President Morris says. "And that's exactly what our mission was, to enhance the reputation of The Church of Jesus Christ of Latter-day Saints."