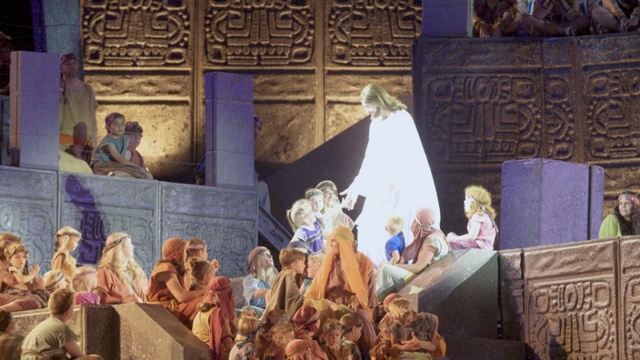 Missed the Hill Cumorah pageant broadcast? It's not too late to watch

The event consisted of a commemorative devotional with keynote speaker Elder D. Todd Christofferson of the Quorum of the Twelve Apostles and a broadcast of the 2019 production of the pageant.

“I express profound thanks to each and all of the thousands who over the years, since 1937, have had any role in or made any contribution to the Hill Cumorah Pageant,” Elder Christofferson said.

Elder Christofferson also quoted President Marion G. Romney’s statement that the pageant has been a tool to share “that the heavens have been opened anew, that God has spoken again, that Christ still lives and has revealed himself in this dispensation as He did in dispensations past.”

Other devotional speakers included former artistic directors, cast, and crew members from throughout the years.

“I'll never forget the love I felt as the rehearsals proceeded and I saw my husband and each of our children at different places on the stage with their eyes fixed on the actor playing the Savior,” said former pageant staff member, Jennifer Buckner. “Night after night, this image sunk deep into my heart, and has become a pattern for our family to follow.”

Read the full article on Newsroom.