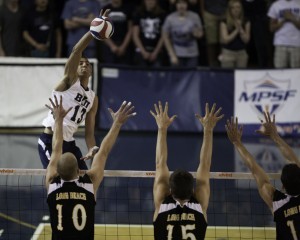 When the sweep was in doubt and the BYU men’s volleyball team looked vulnerable, it went back to it’s bread and butter game plan it executed throughout the whole year. Feed the ball to Taylor Sander and Ben Patch.

BYU did, and the pair of all-Americans didn’t disappoint.

Sander led BYU with 17 kills, seven blocks and three digs while Patch contributed 12 kills, five blocks, five digs and two service aces. Both came up big in the third set to help BYU mount its comeback and propel it to the national championship game, its first since 2004. Penn State was led by EIVA Conference Player of the Year Aaron Russell who recorded 13 kills.