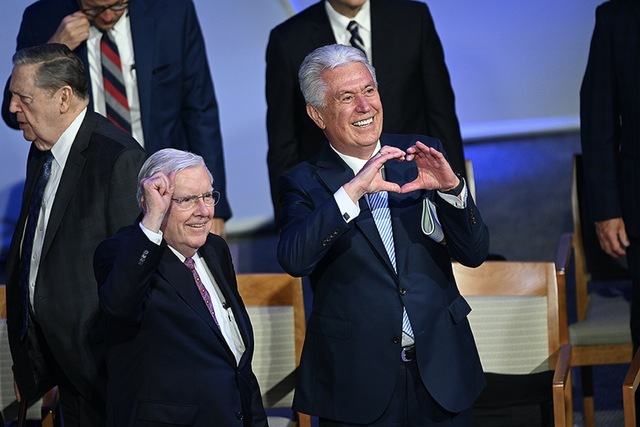 Not a mission leader? You can still enjoy summaries from the Seminar for New Mission Leaders

President Russell M. Nelson’s decision to speak about the “repeated and miraculous tutoring” Joseph Smith received from heaven as the opening talk given during the 2021 Seminar for New Mission Leaders may have seemed like an interesting choice. But President Nelson provided a clear reason for that choice.

“First, to bear my personal witness that this is God’s work, the work of the Lord Jesus Christ, and that Joseph Smith is the prophet of this last dispensation. A testimony of the Prophet Joseph’s pivotal role in the Restoration is crucial for all of us who are preaching the Lord’s gospel,” he said. “Second, to declare that you, too, can and will be guided by heaven in your work as you seek direction, guidance, and inspiration from on high.”

According to Church News, the seminar was held remotely for the second year in a row as a result of COVID-19 concerns. A total of 109 couples who have been assigned to lead missionary work in 49 countries and 14 US states watched and were addressed by a number of Church leaders.

President Nelson told mission leaders that two years prior to Joseph Smith’s death, the Prophet wrote that he had “received many visits from the angels of God unfolding the majesty and glory of the events that should transpire in the last days.” President Nelson told mission leaders that angels will also “surround, prompt, protect, and accompany them” as they do “spiritual work necessary to receive such direction,” Church News reported.

In addition to President Nelson, members of the First Presidency and the Quorum of the Twelve Apostles also spoke to the incoming mission leaders.

Elder Gary E. Stevenson taught that missionaries and mission leaders may come into the mission field with many interests and talents they might consider helpful in making them exceptional missionaries. But ultimately, success as a mission lies in the missionary’s commitment to “find, teach, baptize, and confirm people and to help them become faithful members of the Church who enjoy the presence of the Holy Ghost.”

“No matter a missionary’s language ability, perceived gospel scholarship, memorization ability, public speaking skills, or physical appearance, achieving these are graspable for them. And when they do, the acceleration of the work reaches its potential,” Elder Stevenson said.

“Your careful balance of these spiritually developed principles of success, with prayerful goals, standards of excellence, and measurement of approved key indicators will bless your mission.”

Elder Neil L. Anderson spoke of the danger of leading a mission with high expectations but without “higher love”—a mission consumed with numerical goals but without sufficient caring.

“This can lead to numerical results, but without true repentance or conversion,” he said. “Without sufficient love, we can find at times dishonesty in reporting and insincerity in missionaries’ connection with you, their mission leaders.”

Still, Elder Anderson said that “higher love” without expectations can also be cause for concern, as it can result in fewer spiritual goals and doesn’t encourage missionaries to stretch. A lack of expectations brings “love and friendship but with fewer miracles,” he explained. Instead, he suggests that a mission should create a culture of both higher love and high expectations.

Sharing eight principles from Moroni 10, Elder David A. Bednar spoke of the relationship between spiritual gifts and the attributes of the Savior.

“We receive spiritual gifts when God can trust us to be what we need to be, to do what we need to do, and to be guided to the right place at the right time, so that if a gift or gifts are given, they operate through us to bless other people. Spiritual gifts always and only are given to us so that they can bless, help, lift, and assist someone else,” he said.

Elder Dale G. Renlund taught mission leaders the Finnish word Sisu, a word that, according to Church News, has been described as “stoic determination, tenacity of purpose, resilience, and hardiness, and expresses a characteristic that manifests itself in displaying grit, resolve, and courage in the face of extreme adversity or against the odds.”

“Someone with sisu decides on a course of action, and then adheres to it—no matter what. Sisu is the type of determination missionaries need to stay on the covenant path. Spiritual sisu is not conditioned on the circumstances in their lives,” Elder Renlund taught.

“A mission should be an extended exercise in setting goals, developing a reasonable plan to meet those goals, and accepting responsibility for outcomes, including adjusting plans as needed. It is easy to see that developing these skills and abilities can contribute to a missionary’s future Church service and his or her success in life. More immediately, it will contribute significantly to a rewarding mission.”

Elder Jeffrey R. Holland called for mission leaders to use the words of Christ in teaching missionaries.

“Make your testimony of and from the scriptures so obvious that nothing negative your missionaries will face in their marriages, in their universities, or in their professions . . . will ever deflect them from the course on which you have set them.”

According to the Church News, “Elder Holland noted that the loss to inactivity of a returned missionary is of ‘immense concern’ to the Brethren and to the Lord.”

“Those numbers may not be large, but any number is too large if it is my son or daughter, grandson or granddaughter—or yours,” he said. “As you immerse yourself in this work, you will undoubtedly lose some of the newly baptized converts who don’t quite make it fully into the sheepfold, but we must not ever lose the shepherds of that flock.”

In the seminar’s concluding remarks, Elder Uchtdorf reminded mission leaders that missionary work may look different than it has in the past. “As fishers of men, we learned that it is wise to cast the net the Lord’s way, sometimes to the other side,” he said.