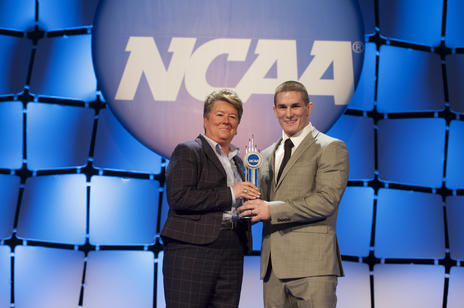 Returned Missionary Awarded as Top 10 College Athlete of the Year

Former Penn State wrestler Matt Brown won a national title last year. This year, he was honored with the NCAA's "Today's Top 10" Award, where only 10 outstanding athletes from the past year are recognized from colleges around the US.

The NCAA honored a returned LDS missionary and national champion wrestler with a prestigious award this past weekend.

Matt Brown, a former Penn State Nittany Lion wrestler and 2015 national champion, was honored as one of 10 recipients of "Today's Top 10" Award at the NCAA convention in San Antonio on Jan. 15.

"It was humbling to be honored among the other top student-athletes in the country at the NCAA convention," Brown said in a text message Tuesday. "I thought it was a fitting capstone to my collegiate career."