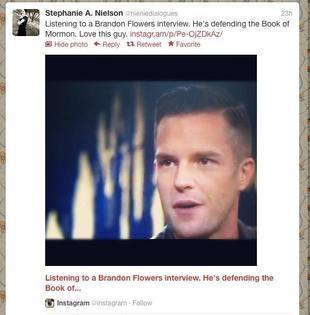 After performing his 11th concert this month in Europe as a part of the iTunes Download 2012 festival, Killers lead singer Brandon Flowers appeared on “Skavlan,” a Norwegian TV show, to wrap up a European trip before the Sept. 17 release of the band's new album "Battle Born."

The show started out as a normal celebrity guest appearance, but host Fredrik Skavlan soon began inquiring about Flowers' Mormon faith. Skavlan asked Flowers to describe the "beauty of faith," and the international rock star spoke positively about The Church of Jesus Christ of Latter-day Saints.

However, Skavlan later welcomed Richard Dawkins, author of "The God Delusion," onto the stage. The famous atheist immediately was asked his opinion on faith, and began denouncing the Book of Mormon, Joseph Smith and the Mormon faith.