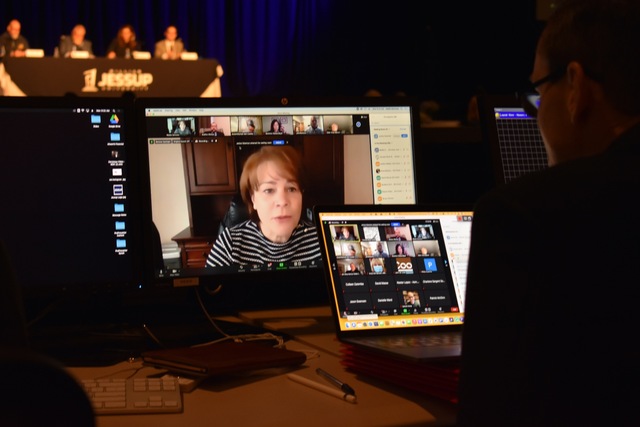 byNewsroom of The Church of Jesus Christ of Latter-day Saints | Apr. 29, 2021

The leader of Latter-day Saint Charities told a panel chaired by three California lawmakers that disasters can be blessings in disguise.

“As the country polarizes and as people move to their tribes, I think one of the great lessons that can be learned — if there’s any silver lining in a disaster — is that we can set doctrine aside, we can set politics aside and we can find common ground to build back up our communities,” Sister Sharon Eubank said. She is president of Latter-day Saint Charities and a member of the Church’s Relief Society general presidency.

Sister Sharon Eubank speaks to a panel chaired by three California lawmakers Monday, April 26, 2021. Some panelists participated in person on the campus of William Jessup University. Others, including Sister Eubank, participated via Zoom.

A disaster by itself will not bring about unity and healing, Sister Eubank cautioned, unless the hard work of communication and relationship building is done in advance.

“We have to be worried about common ground and how to build social cohesion and do some of the smaller projects [that connect] people who would never interact in any other way,” said Sister Eubank, a native of Redding, California. “I would urge this panel and others that are listening to look at the larger picture before the disaster actually happens and build up community communication and relationships. And let’s practice on small projects before the disaster happens so that we have enough social cohesion to go forward.”

Catholic Charities’ Molina said volunteerism is critical in disaster response, especially with the increasing frequency of destructive events in the Golden State.

Molina said when he started in his position several years ago, disasters affected only a couple of counties — and only one at a time. Now, he said, Catholic Charities is looking to help some 21 counties in coming years.

With such a large need for volunteers to help in the wake of disasters, Sister Eubank urged the panel to consider the invaluable role of volunteerism — not only in helping bear society’s burdens in the wake of a disaster but also in fostering societal wholeness.

“As the sector professionalizes, vendors will provide services for fees. But I urge you not to let this replace the role of volunteers,” Sister Eubank said. “The community development that happens through volunteerism is unparalleled, and state and local governments should want to expand that because it increases capacity.”

“Collaboration is huge in the wake of a disaster,” Molina said. “On our programs we have found that the early establishment of an organized, long-term recovery group goes a long way to aiding the recovery of a community. It really brings together all the faith-based organizations that are in a local area.”

When community groups are united, “people are able to collaborate and get together and share resources, share volunteers, share staff, share ideas,” Molina added. “Everything contributes to the recovery of our survivors in our community.”

Sister Eubank said the Church of Jesus Christ of Latter-day Saints has been helping victims of disasters in California since the gold rush of the mid-1800s. In the countless disasters since then — earthquakes, fires and, most recently, the COVID-19 pandemic — she said Latter-day Saints in California have readily come to the aid of their fellow citizens. She highlighted five principles to help the group understand the Church’s approach to disaster preparedness, response and recovery.

“This is critical to us,” Sister Eubank said. “We don’t have our own agenda. We want to coordinate with local officials so that things don’t get duplicated and everything’s organized.”

2. The Church Looks for Ways to Help Disaster Victims Participate in the Response

“It’s easy to cocoon people when they’ve been part of a disaster,” Sister Eubank said. “But mental health professionals recommend that people begin to process their grief by having something active to do. We try to find safe ways that they can participate in this to help mitigate the emotional effects of the disaster.”

3. The Church Involves the Community

“We are always looking for ways that community volunteers can be involved in cleanup, in blood drives, in food distribution, in transportation, in communication,” Sister Eubank said. “Because [these are] Californians, working for California, and that builds our social cohesion, which is incredibly needed right now.”

Sister Eubank said the Church asks, “If we do this activity, does it help us solve the problem later on when it comes up again? Does it safeguard dignity? Is it good for the environment? Does it strengthen families? Is it a Band-Aid or does it solve the root problem?”

“There are so many nuances that are local,” Sister Eubank said. “And it is the communities who live in those locations that can best respond.”

University President Jackson said, “Faith-based organizations are often the first ones in and the last ones there [during a disaster] because they are in the community where the disasters happen. It would be so much more effective if we could have faith-based organizations be well prepared in advance in the context of that local community. And then the experts can come in and supplement and extend that.”

The “secret sauce” of such faith-based volunteerism, Chairman Cooley said, is its faith-rooted compassion. “For many of your faith groups [and] community-based groups, they’re responding to their neighbor. They’re moved by a different sort of compassion than just the scaled-up response of a government agency, as important as that is. … It also sustains them, actually. A person who is moved by care for another may find themselves able to go a little further on and to find the reserves to carry on in the midst of need. And of course, to see compassion in action is always inspiring to others.”

Listed below are just a few of the ways that Latter-day Saints in California have responded to disasters in recent years:

How Missionaries Are Comforting Californians During COVID-19 (2021)

For Unemployed Californians, Food Donations Are ‘a Little Bit of Hope Coming to Their Door’ (2020)