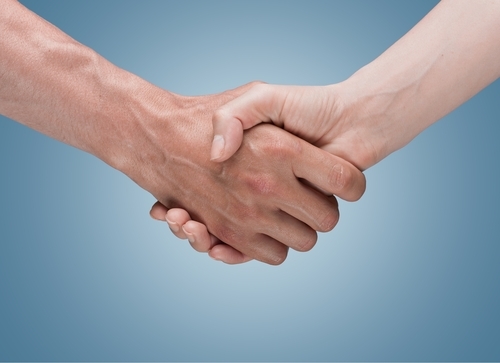 Teachings of Gordon B. Hinckley Lesson 20: "Fellowship with Those Who Are Not of Our Faith"

In the introduction to this lesson, President Hinckley talks about the fellowship and unity we ought to have with those not of our faith. Here is the quote:

“We are of various doctrinal persuasions. While recognizing our theological differences, I think we are of one mind in our awareness of the evils and problems of the world and the society in which we live, and of our great responsibility and opportunity to stand united for those qualities in public and private life which speak of virtue and morality, of respect for all men and women as children of God, of the need for civility and courtesy in our relationships, and of preservation of the family as the divinely ordained basic unit of society.

He makes some important distinctions in this paragraph. He says that we “recognize our theological differences,” but that shouldn’t stop us from also recognizing all the things we have in common, like our recognition of the evil in the world, and the need we all have to support morality and goodness.

The prophet goes on to acknowledge our need to be civil and courteous in our relationships, and the importance of recognizing the family as “the divinely ordained basic unit of society.” Twice in the paragraph, he says we need to be united with others outside of our faith. First, he says that we are of “one mind” and then he says we need to “stand united” for all things that are good.

Unity can be had in many forms and in many ways. The Lord always seeks for unity among His children whenever it can be had. There is spiritual power in unity. Admitting the possibility for unity requires the recognition that we have more in common with those outside our faith than we may have previously considered possible. We cannot afford to look only upon our differences, for as children of God there is more that binds us than there is that separates us, no matter our race or religion.

The common people in all societies seek to relieve the burdens of the poorest among them. They all show compassion on the sick and afflicted. These are universal attributes of all of God’s children. The Lord is asking us to use these commonalities as a way to unite with others to do good among all of his children.

“May the Lord bless us to work unitedly to remove from our hearts and drive from our society all elements of hatred, bigotry, racism, and other divisive words and actions. The snide remark, the racial slur, hateful epithets, malicious gossip, and mean and vicious rumor-mongering should have no place among us.

“May God bless us all with the peace that comes from Him. May He bless us with thankful hearts and with the will to mingle together with respect one for another, uniting our efforts to the blessing of the communities where we are fortunate to live.”

One of the most difficult forms of separation between groups of people is manifested in the racial slurs or jokes about other people we hear about those people as we are growing up. When we are taught to mock others through humor it creates within us a kind of cruelty that is not easily dispelled, mainly because the jokes aren’t “meant” to be cruel. But cruel they are. When we make fun of someone’s culture or ethnicity we demean what it means to be them. It also demeans us.

The Brethren seem to recognize the good in other religions, cultures, and governments. Do we? They openly embrace those of other faiths and persuasions. Are we that open to things that are different from our own upbringing?

“We must cultivate tolerance and appreciation and respect one another.” Tolerance isn’t smugness. It doesn’t “put up” with what others do or how they behave. To have tolerance for someone who is different from us means to show them respect, and to allow them to be who they are, just as we hope they will permit us to be who we are without judging or condemning us for our choices about what to believe and how to live our lives.

To tolerate diversity is to allow it to not only exist but to thrive. It is possible to live among different cultures and still be friends and family with them. I lived for many years at BYU-Hawaii, the most culturally diverse university of its kind in the United States of America. Only about half of the students there spoke English as their native tongue.

I taught some classes to the foreign students on what was culturally appropriate in the United States. What I learned in the process is that there is almost nothing you can do in life that doesn’t offend someone somewhere. But the more we know about how other cultures work, the better we can come to understand why people make some of the choices they do. It builds respect and acceptance for others to learn how their cultures express certain feelings and values.

We must not be partisans of any doctrine of ethnic superiority. We live in a world of diversity. We can and must be respectful toward those with whose teachings we may not agree. We must be willing to defend the rights of others who may become the victims of bigotry.

The Lord has told us in the scriptures that He has given a portion of his word to every nation. He has called men in all nations and inspired them to teach good things. It seems that we sometimes have a much more difficult time with the concept that others don’t believe the way we do than the Lord seems to have with that idea.

Just because our neighbor doesn’t have the exact same set of beliefs we have, it doesn’t mean that we can’t love them as fellow children of God. It doesn’t mean that we can’t work together in good and meaningful ways to the benefit of all. After all, if we ever want them to be open-minded enough to look into the teachings of the Lord’s Church, we need to first be open minded enough to accept them where they are at and appreciate the good they already have in their lives.

For some of us, it may come as a surprise that God does not love us more than He loves the children of Hindu parents, Muslim parents, Buddhist parents, or atheist parents. They are all His children and He loves them equally. He expects us to learn to get along with all our brothers and sisters. His expectation for us to learn to get along with each other has nothing to do with their current status regarding their eternal blessings. As His covenant-making children, our obligation to represent His will and love is greater than it is for anyone else.

We certainly do not need to be boastful about [our religion] or to be arrogant in any way. Such becomes a negation of the Spirit of the Christ whom we ought to try to emulate. That Spirit finds expression in the heart and the soul, in the quiet and unboastful manner of our lives. ...

But this does not put us in a position of superiority. Rather, it should humble us. It places upon us an unforgiving responsibility to reach out with concern for all others in the Spirit of the Master, who taught, “Thou shalt love thy neighbour as thyself” (Matthew 19:19). We must cast out self-righteousness and rise above petty self-interest.

As those who profess to be the true followers of Christ, it falls upon us to represent Him in all places and at all times. We must be the ones who quietly go about doing good and uplifting those around us in the spirit of our master, Jesus the Christ. It is our responsibility to show forth His love to all the world, no matter what their personal persuasions.