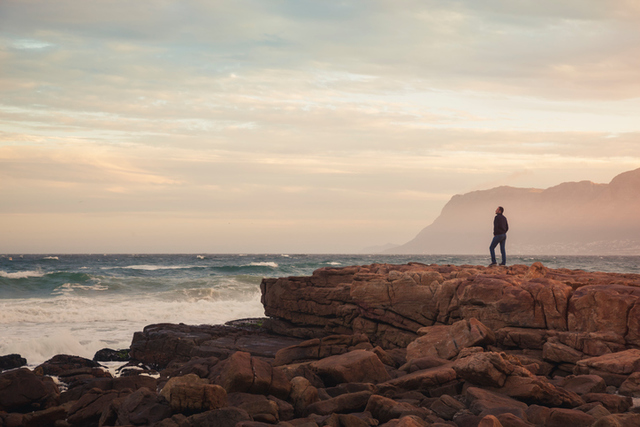 The One Thing That Prevents the Lord from Helping Us Change

byRobert Reynolds, excerpted from "Unstuck: How the Savior Frees Us from Our Favorite Sins" | Jan. 08, 2020

This excerpt originally ran on LDS Living in July 2016.

While attending NYU Law School, I passed two homeless girls in the West Village. When one asked for money to buy food, I bought them hamburgers and fries. As we ate, they told me about their life on the street.

Their stories were heartbreaking. Beneath multiple piercings, tattoos, and filthy clothes, I saw two sad and lonely young women in their early twenties. They described the dangers of sleeping in parks, being robbed on the street, and bad experiences they’d had in homeless shelters.

“What do you girls need, then?” I asked.

They said sixty dollars would be enough to eat and get a room in a cheap motel.

My heart went out to them. “So if I found you on this corner and gave you sixty dollars every day, would you be happy?”

After a moment of silence, the younger of the two began to cry and then shook her head.

“We want jobs,” the other one explained. Without résumés or clean clothes, the places they had approached were unwilling to hire them. I took their cell phone number and volunteered to help.

I first found a customer service job and reached out to the girls. We met again on that street corner, and they told me that they didn’t want secretarial or phone work. They also didn’t want jobs in two different places. What they really wanted were waitressing jobs at the same restaurant. This felt a bit choosy, but they seemed sincere. So, again, I went through local help-wanted advertisements and made phone calls.

I found a kind man who agreed to give the two young women work uniforms and a job waiting tables in a Russian restaurant. Sight unseen, he extended this opportunity solely because he agreed that these two homeless girls just needed a chance. When I told the girls, they broke down. They were so appreciative, so excited. I gave them the address, start date, and time. They agreed that the location and hours were perfect. I felt wonderful.

Unfortunately, that feeling didn’t last. On day one, they didn’t show up for work. I convinced their employer to give them another chance. When I reached them, they gave me a story about being stuck in Brooklyn having to “watch a friend’s house.” I said they had another chance to work the following day, but if they didn’t show up they would lose the job. They apologized profusely and thanked me, swearing they would be there.

When I called them, frustrated, I got another poor excuse. After once more speaking with the owner, I told them they could go to work any day they wanted and that he would give them a chance. I also said that I wouldn’t keep following up. If they really wanted that job, it was theirs.

Weeks later, I ran into the same girls begging on the street. As it turned out, they had never shown up to the restaurant. I thought about giving them a hard time, but then I realized it wasn’t worth it.

These girls had hard lives and obviously needed help. Their claims to want help seemed sincere. But, in the end, their desires were not sincere enough. They only thought they wanted something I could offer. They liked the idea of a stable job, but they never honestly decided to take one.

Like those two destitute young women, if we aren’t certain we want help, God cannot help us. Only when we are truly honest—with a “full purpose of heart” and no “hypocrisy” or “deception before God” (2 Nephi 31:13)—is the Lord willing and able to grant a mighty change of heart.

► You'll also like: How to Conquer Your "Favorite Sins" for Good

In Alma’s experiment with a proverbial seed, he explained that we need only to “exercise a particle of faith”—a particle as small as a sincere “desire to believe”—for the Lord to help us (Alma 32:27). We then need to “let this desire work in [us],” and because that seed of desire is good—as long as we nourish it and don’t cast it out—it will grow (Alma 32:27). We do not need full-blown faith right out of the gates. Like the father of that possessed and suicidal son in the Bible, what we need is an honest “desire to believe.” We need a sincere disposition. When sincerity is combined with strong humility, the Lord gives us more desire and faith.

Again, the role of works is secondary. Note the type of tree that Alma’s seed becomes: the “tree of life” (Alma 32:40). This seed of honest desire grows into that same iconic tree dreamed of by Lehi and Nephi. The fruit of that tree is God’s love. And the pure love of Christ is charity, which produces good works. We don’t do good works and then receive faith, and we don’t save ourselves. If we humbly and sincerely desire to believe, the Lord will help our unbelief, give us faith unto repentance, and fill us with His love. When we are full of charity, good works inevitably follow.

So, when you look at it, the Lord gives us what we want! God “granteth unto men according to their desire” (Alma 29:4). Even the sons of perdition receive what they want (see D&C 88:32). Indeed, all of us will “enjoy that which [we] are willing [i.e., want] to receive.” The “best gifts” are “given for the benefit of those who love [God] and keep all [His] commandments, and him that seeketh so to do” (D&C 46:8–9, emphasis added). We just need to decide if we really do want Him to intervene in our lives and help make our desires righteous.

We must decisively want a mighty change of heart, because when we are stuck in cycles of sin there is no other escape. We cannot forsake those sins alone by mere force of will, or we would have done so already.

Again, as Elder Bednar explains, this change is “not simply the result of working harder or developing greater individual discipline. Rather, it is the consequence of a fundamental change in our desires, our motives, and our natures made possible through the Atonement of Christ the Lord.” With the great Mediator’s Atonement and spiritual intervention, we may overcome “both sin and the desire to sin, both the taint and the tyranny of sin.”

Why did it take me so many years to realize this?

After graduating from seminary and studying for a year at BYU, I thought I understood the Atonement. I didn’t question that until I was a new missionary, lying in bed and trying to fall asleep.

“What don’t you understand?”

“The Atonement,” he replied. “I just don’t understand it.”

Well, this missionary was about to go home after two years of service, and I had yet to wear out a single pair of socks. But I was a little bothered by this late-night presentation, and I took the bait.

“What don’t you understand?”

“How it was possible, you know.”

“What, you think you understand how it was possible?” he asked after I remained silent.

I couldn’t help myself. “I don’t know, I think so. Christ was able to take upon Himself our sins and be resurrected by volunteering to put the Father’s plan into operation in the premortal existence and living without sin. He had to have a mortal mother (Mary), so He could experience temptation and die, and a divine Father (Heavenly Father), so He could be sinless and resurrected.”

“You don’t understand,” my companion said.

“What don’t I understand?” I asked, frustrated.

Wound up, it took hours before I finally slept. I’m sorry to admit that I carried that frustration with me throughout my months with this companion. And I’ve thought about that incident many times since.

I now realize there are indeed many things I don’t know about the Atonement (including still not knowing what it is I don’t know). More importantly, I have since learned significant components to the Atonement that I did not understand while serving a mission. It’s embarrassing how little I knew compared to that confidence I once displayed.

I did not understand that grace was something I needed in order to obey, as opposed to just some “difference” Christ made up after I died. I did not realize that the Atonement wasn’t intended for me to simply repent over and over for the same sins but instead to remove my very desire to commit sin. For example, the Atonement doesn’t only forgive someone for adultery; it can remove lust from his or her heart. Of course, I had read about mighty changes of heart. But for some reason I didn’t realize they applied to me. I suspect I am not alone when it comes to an incomplete understanding.

In this life, we all need to have our hearts changed—gradually or mightily, and most likely repeatedly. The first step in receiving this vital blessing from the Atonement is to decisively want it.

For more insights, stories, and encouragement to fully use the Atonement and overcome sin, check out Robert Reynolds' Unstuck, available at Deseret Book stores and deseretbook.com.