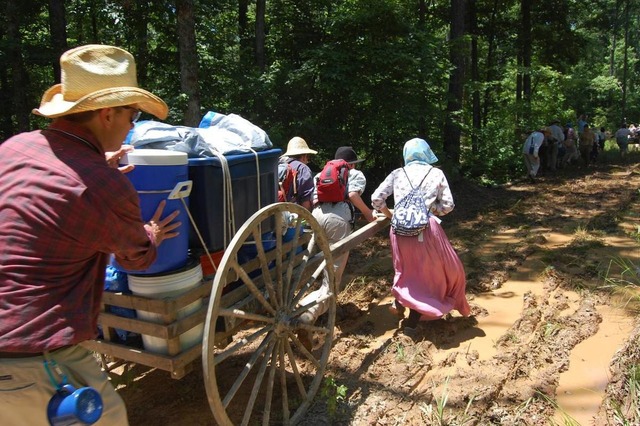 The Origins of Trek: When Did Dressing Up and Pulling Handcarts Become a Thing?

Curious about the origins of trek re-enactments before you hit up Trek: The Movie in theaters this weekend? Look no further.

This week, moviegoers along the Wasatch Front may have their heartstrings pulled as they watch handcarts pushed in a new Mormon youth comedy called, "Trek: The Movie." The film opens this Friday.

As I've traced the history of the trek phenomenon — from an obscure one-off stake activity to a cultural ritual captured on the silver screen — I've wondered whether the Mormon pioneers could have envisioned such re-enactments becoming a central part of the Mormon youth experience.

The explosion of popularity in handcart trek re-enactments dates back to 1997. Though it was by no means the only factor, the Mormon Pioneer Trail Sesquicentennial Celebration in 1997 was the bellwether event that ushered in the modern-day phenomenon of handcart trekking. With two decades of continued keen interest in holding handcart treks in the church, I started studying how this program began, especially its early roots. My findings appear in an article, “Handcart Trekking: From Commemorative Reenactment to Modern Phenomenon,” in the latest issue of BYU Studies Quarterly.

After the turn of the century, Boy Scouts began to hike over the last miles of the Mormon Trail, from Henefer to the mouth of Emigration Canyon. There may have even been some who re-enacted the handcart journey, but the very first youth handcart trek that I found in my research occurred in 1966. In that year, young men from the Phoenix Stake constructed some carts using big metal wheels that they scavenged from farm wagons. They hauled them on trucks and trailers from Arizona to Utah. They pushed them from Henefer, up and down Big and Little Mountains, in the same ruts where handcart pioneers had gone more than a century earlier. They pounded out bent wheels over aspen coals, tempering their repairs in cold water. Those men who went on this adventure that I spoke with, now old, told me what an impact this had on their lives and testimonies.