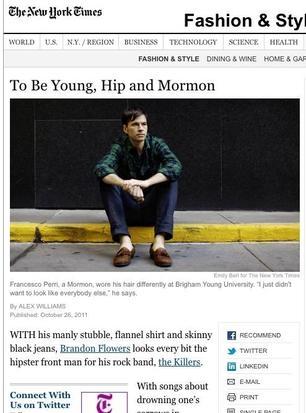 There’s little doubt that the LDS Church’s “I’m a Mormon” advertising campaign is making good headway when it has received attention from comedian Stephen Colbert.

His funny but, alas, sacrilegious, mock advertisement of how Catholics show how cool they are created a wonderfully favorable dynamic for The Church of Jesus Christ of Latter-day Saints, I thought.

But it is the New York Times article, titled “To Be Young, Hip and Mormon,” that really captured my attention. The article covers Brandon Flowers , front man for the band the Killers, and his new “I’m a Mormon” advertisement.

In fairness, this Style section article seemed well-intentioned, and it showed admiration for Latter-day Saints, but there’s something that troubled me about it.