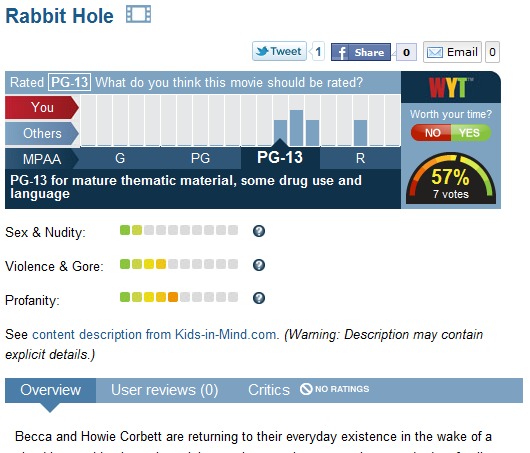 Have you ever seen a trailer for a movie or flipped through a book and wondered, “Is this worth my time?” or, “Should my kids see this?” Especially with the plummeting moral values around us, sometimes going online for expert opinions doesn’t offer any useful information. What the critics may think is appropriate might not match what you think. In response to this growing need for LDS and family-orientated reviews, Deseret News has created the Family Media Guide.

The Family Media Guide is a website devoted to the rating and reviewing of media by like-minded people. Individuals are able to add their opinion of a product to the many other ratings that have been given.

“This is brilliant. Fantastic implementation,” said Aris Christofides, the founder of critics.com and Kids-in-Mind. “I'd find it far more useful as a repository of opinion, for instance, than what Rotten Tomatoes is doing.”

Eventually, the website will cover all types of media: movies, books, games, DVDs, television shows and others, but they aren’t waiting until everything is set up before launching it to the public. Currently, the website is in beta testing, focusing completely on new-release movies. They encourage feedback on the website in order to make it as user-friendly and effective as possible.

As it is now, there are three different ways a user can evaluate a movie: the rating, the Worth  Your Time (WYT) meter and the reviews.
The site initially offers the Motion Picture Association of America’s (MPAA) rating of the film, whether G, PG, PG-13 or R. However, as well-meant as their rating is, oftentimes there seems to be discrepancies between the rating and the actual content of the movie. Because of this, the Family Guide allows its users to give it their own rating.

The rating bar shows the MPAA’s rating, other users’ ratings and then your own in red. Also, under each letter rating, there are higher and lower spots. For example, someone might give one film a ‘low’ PG rating (closer to G) and then give another a ‘high’ PG-13 rating (more like R). This allows someone looking for feedback a good idea of what to expect.

Then there is the WYT meter. Next to the MPAA ratings bar are two buttons, ‘yes’ and ‘no,’ with which the user can vote whether it was worth the time or not. The accumulation of every vote is then averaged in a meter, which gives the percentage of users that voted yes, the movie was worth their time.

The site was built around the belief that time is a person and family’s most valuable resource and it shouldn’t be wasted sifting through worthless media. The WYT meter makes the decision quick and easy.

And, like any good media review site, there is a place for users to give their reasoning behind their votes and a chance to add any other information about the movie they feel should be included. Once published, the review shows their WYT vote, their rating and their written review.

In addition to these three features, the Media Guide has coupled with Kids-in-Mind.com to break down the types of inappropriate content into a 1-10 scale in three categories:  Sex/Nudity, Violence/Gore and Profanity. They have also linked their site to Kids-in-Mind for a thorough, unbiased description of the inappropriate content so parents and other users can decide what is offensive to them and what isn’t.

Once you’ve come to a decision, the website provides a search bar to find movie times and theaters in locations all across the country.

On its beta information site, the creators said, “The Family Media Guide gives you access to expert ratings and critics' reviews, but it's really about a community of like-minded, values-driven people helping each another make smarter media choices. So don't be shy. Join the conversation.”

For more about the Family Media Guide, visit their beta information site here.