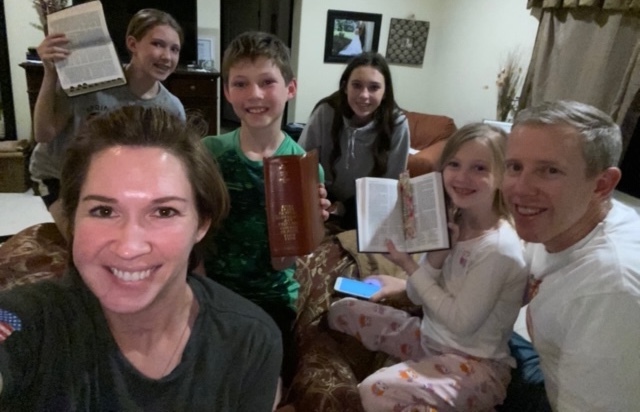 On February 15, 2019, Lori Walker walked into her vacation home in Heber City, Utah, but she never walked out. Instead, after the home exploded with Walker trapped inside, she was lifted and carried both out of the home and through the days, weeks, and months that followed.

On this week’s All In podcast, Walker shared how she felt supported by family, friends, and neighbors following the explosion that changed her life forever.

“I felt so much love coming from the whole world into our hearts. You know, sometimes you hear people talk about the Spirit feeling like a hug around you? I felt lifted, carried through all of this,” Walker said. “I have people ask me what it was like to feel the pain that I was feeling in the hospital. I don't remember the pain at all. I remember how amazing it felt to feel carried through that experience.”

Morgan Jones: I have thought a lot about one thing that I think would be tough in your situation is when you have been the person that gives service and is healthy and all of that, then having to humble yourself and be the recipient of service. So, what has being that recipient taught you?

Lori Walker: Well, I should say that I didn't need to put any effort into humbling myself because I think that I was about as low as I could have been at that time. So I did not put any effort into that, it happened all by its magical self. I do prefer to be the doer. I think most people would agree that it feels better to be the doer than the receiver. But I was so touched by the ways that people found to serve us. We had a Google Doc passed around the ward, and then it got spread out to the community, and even out to my husband's work and beyond that, of people who wanted to provide meals, and we had meals for months without a single break. Meals seem like such a small thing to provide, but those meals put a lot of pressure off of our family, that there was no need to go off to the grocery store or put any mental effort into figuring out what we were going to eat. It just was provided, and one less thing to think about. It allowed us to have some normalcy of a sit-down family dinner, instead of bowls of cereal for every meal.

Along with that, I've got a list on my computer, more than a hundred items long, of beautiful ways people served. Some of the most meaningful ones were, a carpenter up in the Heber area, where the cabin explosion was, whom I've never met, made me a beautiful stool and had the heroes that rescued me all sign it. It was the perfect height to elevate my foot. It was the perfect height to drag over to the piano and give lessons to my kids on. I use it every day, and I just thought, "Who would have ever thought that a stool would have made such a difference?" But it really did.

I had some friends, the Sweat family, that campaigned this "Lights for Lori" thing, where they had people hang hearts of lights in their window to show support and love for our family. And they hosted a parade when I came home from the hospital with glow sticks and people waving, just driving through the community and seeing people that didn't even know who I was, hanging hearts in their window hoping that I would be okay, was so touching. We had a primary that came from out of state to line our driveway with lanterns, paper bags that they had decorated and punched into shapes, so that our driveway would be lit. And that was exceptionally beautiful. I had a friend who worked at a medical spa gift me all sorts of lotions and treatments to help me with my burns and any discomfort that I had.

Maybe the most meaningful of all was a gentleman who had no idea who I was. I was familiar with him, Blake Gillette, because he had written some primary music that I loved to teach my primary kids. I reached out to him at one point to thank him for his music, and I closed my email with something like, "I'm in awe of your talent. I've tried to write songs before, and I can't do it. I'm just really glad that somebody like you is out there sharing music with the world, thank you." And he wrote back, “Let's hear what you got.” And because of his willingness to reach out to me, we co-wrote this song, "I Feel God's Light," where I got to testify of how I feel the Holy Ghost impacts me on a personal level, all the time, but most especially during this accident when I felt so in tune. Whenever I was having a difficult day, and those days did come, if I listened to that song, it was a reminder to me of all the miracles that we'd felt, and how strong the Holy Ghost was attending to me during that time. And even still, it brings me to tears just thinking about how special that time was, and to have that captured in song was really special. I'm really grateful for people who served with their own personality.

MJ: I think that that is so beautiful. The idea that we bring to the table what we have to offer. It's kind of like the wise men, right? They brought what they had to give to the Christ child. And every one of us has an opportunity when there is someone in need of love, it doesn't mean that—maybe you don't have nursing skills, or maybe you don't do well at the sight of an open wound or whatever—but you can bring what you have to offer, and that can make a beautiful difference and an impression on someone's heart. And so, I think that's such a good point, Lori.

LW: Absolutely, you said that so well. I've really learned that serving with who you are individually feels the very best to people, and that display of love is what heals more than the gift itself. I've also found myself, at times, shying away from opportunities to serve, thinking, "Well, this feels like an especially hard time; I'm sure they only want close family or friends right now." But I've learned that not knowing somebody very well should never stop me from writing a note or dropping something off. I've been very touched by people's willingness to reach out in any way they knew how.

MJ: Yeah. I think sometimes, we feel uncomfortable because we think that. We think, "Oh, I don't know them," or, "They're going to think this is weird," and we let all of those things hold us back. I've quoted this quote before on this podcast, but I think it was Camilla Kimball who said, "Never suppress a generous thought." My grandma was a great example of that to me. She had a neighbor who, her husband passed away, and my grandma had been without her husband for years. She called this neighbor, and she said, "I know that you're going through a hard time, and I just wondered if I could come and sit with you." She didn't know this lady very well, and we didn't know that this had happened until after my grandma passed away and this lady reached out and told us about this experience and how much it had meant to her. And so, I think, sometimes, we kind of have to step out of our comfort zone. Knowing my grandma, that was not in her comfort zone. So, I think that idea, Lori, is so beautiful and important.