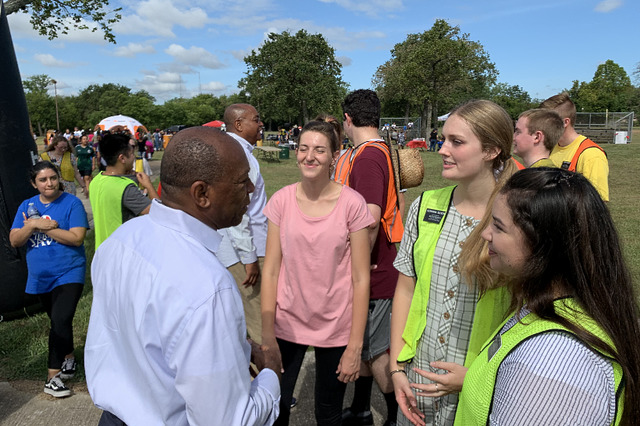 While Latter-day Saints consistently, quietly, and faithfully work alongside their fellow citizens through JustServe and a multitude of other community projects, full-time missionaries of The Church of Jesus Christ of Latter-day Saints have become an easily identifiable and compelling symbol of joyful service.

Case in point: At a recent backpack and school supply giveaway at Tuffly Park in Kashmere Gardens, a historically African-American neighborhood of Houston, Texas, the missionaries were there by invitation—from Houston City Hall. Houston Mayor Sylvester Turner had asked for the missionaries to help at the event, reported Texas Houston Mission President Jordan Peterson.

To have the mayor of the nation’s fourth-largest city specifically reaching out to and inviting the missionaries to participate in important city activities is a credit to the service they provide and how they present themselves, President Peterson said.