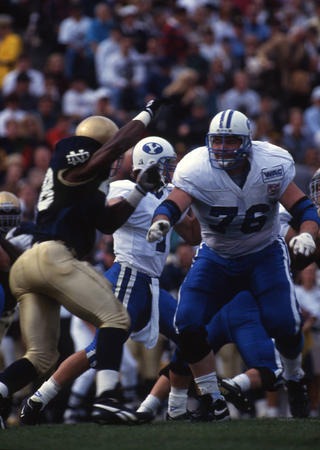 20 Years After Saying No to a $1.5 Million NFL Contract, LDS Man Still Has No Regrets

Twenty years after making a decision that shocked the National Football League — and plenty of other people — Eli Herring wants the world to know he’s been abundantly blessed. And he’s happy.

“There was never a regret,” he said this week, just days before the start of the 2015 NFL draft, which will transform college kids into multimillionaires.

Herring, who once was considered one of the top offensive linemen in the country, is a humble man who doesn’t seek the limelight and is reluctant to do interviews. But when he’s asked, he’ll share his powerful religious convictions that led him to turn down an opportunity for a lucrative career in the NFL in order to avoid playing on Sundays and to keep the Sabbath Day holy.

Based on what’s transpired over the past two decades, Herring has no doubt that the decision he made was the right one for him and his family.

“The main thing is that I know something now that I was acting on faith on 20 years ago,” he said. “That is, I believed that the Lord would bless me and keep promises that I have learned about as I have studied the scriptures and listened to the prophets. Now I know that. After 20 years, He’s kept his promises abundantly. I’m very grateful and I’m glad I made that decision.”

For Herring, 45, a math teacher and assistant football coach at Mountain View High School as well as a member of an LDS stake presidency in Orem, the evidence of that truth is all around him.

This week the father of seven children sat in his small office at his modest home, reflecting on the impact that choice has had on him over the past 20 years.