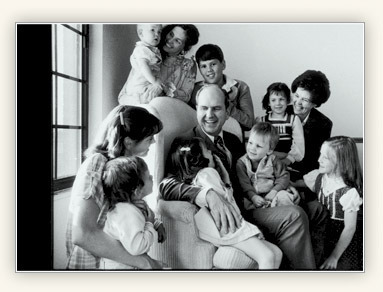 Family preparation for General Conference is a little different when “Dad” is also “President.”

BYU geography professor Clark Monson is the youngest son of President Thomas S. Monson, president of The Church of Jesus Christ of Latter-day Saints. He remembers sitting in a marsh at 8 years old, listening to his dad give his talk over the radio as they waited for passing ducks on the first hunting weekend of the year.

“I can remember that it was always kind of disappointing that my dad always had to be at General Conference,” Clark Monson said. “He couldn’t ever go duck hunting on the opening day anymore.”

For him, the man called as the Church’s prophet is simply “Dad,” but his father’s ecclesiastical service is all he’s ever known. “I’ve never seen him serve in any capacity except as a General Authority,” Clark Monson said. “He got called into the Quorum of the Twelve at about my fourth birthday. That’s the only calling I’ve ever really known him serving in.”