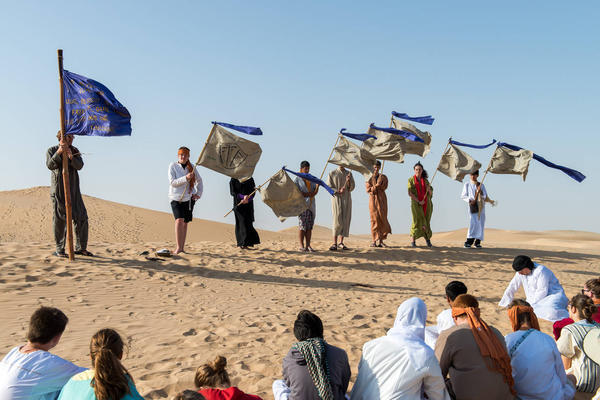 Around the year 600 B.C. the Lord commanded the prophet Lehi to depart with his family into the wilderness. “And he left his house, and the land of his inheritance, and his gold, and his silver, and his precious things, and took nothing with him, save it were his family, and provisions, and tents, and departed into the wilderness” (1 Nephi 2:4).

Though this took place over 2,500 years ago, youth of the Abu Dhabi Stake in the United Arab Emirates trekked through the Arabian Desert in what might have been the footsteps of Lehi and his family. “It was a bit of a novel experience,” said Rob Bateman, the Abu Dhabi Stake president.

“To actually be out in the desert, exposed to the heat, tromping through the sand, it gave them a sense of some of the effort of following the Lord’s command in the time of Lehi.”

Planning the conference for nearly 70 youth, who are mostly children of expatriates, proved to be challenging, given that the stake covers a region that is more than 1,800 miles and many of the youth had to be flown in from places such as Kuwait, Oman and Qatar.