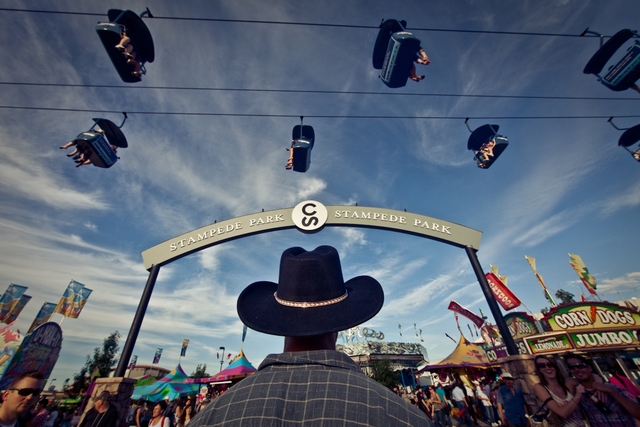 Another Mormon First: How the Calgary Stampede got its name from a Mormon cowboy

"What’s in a name?" Shakespeare long ago asked. "A rose by any other name would smell as sweet," wouldn’t it? For those familiar with the Calgary Stampede, it’s hard to imagine the beloved rodeo spectacle with any other handle.

“There’s a romance that goes with it,” said Jack Hicken, a retired school teacher, amateur historian and rodeo enthusiast from nearby Stirling, Alberta. “Stampede . . . I don’t know if there is another word that could capture the excitement of Calgary’s pageant or the thrill of the only sport where a man pays out of his own pocket to chance breaking his neck.”

People across the continent seem to agree. Since Calgary’s famed annual rodeo and exhibition first donned the moniker in 1912, hundreds of rodeo organizers have adopted the title of Stampede for their own events. Few know, however, that the term can actually be traced a decade further back to the tiny town of Raymond, Alberta, and the man who coined its name: Oscar Raymond Knight, one of the area’s prominent Latter-day Saint settlers.

Born in 1872 in what was then the Utah territory, Knight served a mission in England before moving to Canada with his father, wealthy miner Jesse Knight, in 1901. Together the men established the town of Raymond (which remains one of several predominantly LDS communities in southern Alberta), and Knight was charged with managing his father’s expansive ranch and livestock.

“Money gave [Knight] tremendous privilege, but he had manure between the heels of his boots,” Hicken said. “Ranching and rodeo were his interests, his passions, his life.”

In 1902 Knight invited all ranchers in the area to send a team of bronc riders and steer ropers to Raymond to compete for top honors. It would be the first organized rodeo in Canada, and its name would come from a random stroke of inspiration.

“The story goes that [Knight] and his ropers were trailing a bunch of wild horses into town for the event, and he was trying to tell the other guys what they would do if the horses were to get scared and stampede,” Hicken said. “He just kind of stopped mid-sentence and said, ‘Stampede?! That’s what we’ll call our celebration!’”

After the success of the first event, Knight began planning early for the second Raymond Stampede in 1903.

“It was the first rodeo in Canada to have entry fees, official contest rules and prize money,” Hicken said. “[Knight] spent thousands of dollars to have Canada’s first permanent rodeo arena built, complete with a covered grandstand for spectators.”

In the years that followed, Knight remained heavily involved in rodeo as a competitor, stock contractor and producer. He claimed the title of World Champion at the North American Calf Roping Championship in Calgary in 1924 (an event he is credited with introducing to Canadian rodeo), and followed it up with a second Championship in 1926, when he was 54 years old. For almost 40 years Knight produced rodeos and furnished livestock to stampedes in Alberta, Saskatchewan and Montana—not the least of which was the Calgary Stampede.

Today, there are some who would tell you that the Calgary Stampede would never have come to be without Knight, but just how involved he was in getting the inaugural event off the ground is something that has lived on only in anecdotal history Hicken said.

“He was a master promoter for sure, and probably had some sway, but all we can say for sure is that he had a significant role to play in influencing the growth of rodeo in Canada in general,” Hicken said.

Indeed, Knight has been dubbed the “Father of Canadian Rodeo” and was inducted into the Canadian Rodeo Hall of Fame in 1982 for his unequalled contributions as a pioneer and builder in the sport of rodeo.

Whether or not they are aware, more than one million visitors will partake in Knight’s legacy this July, as the Calgary Stampede commemorates its centennial with heftier prize purses, more concerts and bigger celebrations than ever before. For more information about the Stampede and associated festivities, visit calgarystampede.com.

You can also read our article from the May/June issue featuring other interesting Mormon Firsts.