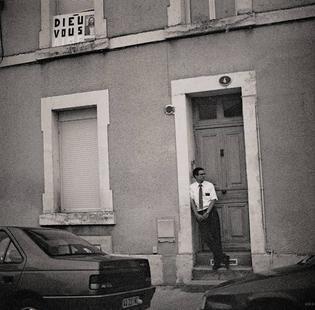 I love seeing fantastic new ways of using blog technology, and Skylar Williams, an ingenious missionary who just returned from serving in Switzerland and France, took to the streets of southern France while a missionary to take a series of photos that served as artistic renditions of missionary work. I’ll let him explain the process:

“Near the end of my mission, I received my (mission) president’s approval to shoot a series of photos based on the purpose of missionaries. The photos are visually pleasing and thought-provoking, yet subtle and full of deeper meaning. We had a street board which I wrote different messages on, mostly all in French because we were in southern France at the time. I then had my companion hold the board and I took a picture. In six weeks this idea went from my little mission notebook to 40-plus photos taken with an old film camera, printed each (and then) spanned the walls of the cultural hall in our church by the beach of Marseille.” The missionaries then invited whoever was interested to come by the gallery at the church house.