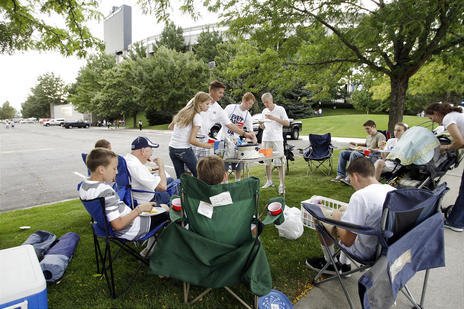 An overcast gray sky dropping occasional drizzles of rain did not stop hundreds of Brigham Young University tailgaters from having a good time before and after the BYU/Washington State football game Aug. 30.

Smoke from barbecues drifted over parking lots, which were dotted with blue and white canopies, shirts, hats and flags. People partied under the open sky, under canopies, from the trunks of cars, from pickup beds or the comfort of RVs of all sizes. A few kept track of other football games on big screen TVs.

Richard and Sandy Johnston, of West Valley City, have driven their RV to BYU football games for the past five or six years. They’ve had season tickets for 20 years. Usually they bring one of their grandchildren. “Some of them aren’t as interested in the game as we are, but they like the weekend out with us," Richard said.