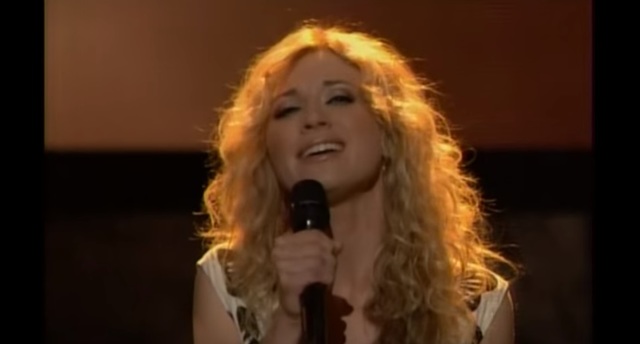 Brooke White, LDS "Idol" Finalist, Recalls Most Embarrassing Moment on Show & How It Made Her Stronger

In celebration of the final season of American Idol, Yahoo! Music has been highlighting the best memories and moments of the show through the eyes of those who competed in it. Recently they highlighted Brooke White, who shared the moment when her mind went completely blank on live television. "I was kind of a wreck throughout the show over my imperfections, and it forced me to deal with them in front of millions of people," she says. "I can’t tell you how uncomfortable that was, how it kind of broke me. But strangely, that moment that tortured me then seems to be what people remember the most now, and with such generosity and fondness. It has taught me to embrace vulnerability. We all make mistakes. I just happened to make mine on live television. And just imagine, if that had never happened, I would have never gotten the chance to do 'Brooke White Stops and Starts the Classics”'on VH1’s Best Week Ever."

I guess Simon Cowell was right when her told White, "Listen, Brooke, you have got to do what you want to do and fight for it, and don’t let anyone tell you no.”

To this day when a stranger stops me in Target, or when a flight attendant recognizes the sound of my voice, they almost always say the same thing: “My favorite moment is when you stopped and started over,” or “Wow, that was so brave of you,” or even “That was very professional.” Makes me laugh.

I’m grateful for their kind words, but I am not sure I can take any credit for being brave, and I definitely can’t claim it was a mark of my professionalism. It simply just happened. I think they call it a “brain fart.” And it was mortifying.

It was Andrew Lloyd Webber Week, and to give you some context, I was coming off the back of Mariah Carey Week, a rougher week in my Idoljourney. It was the week I had missed my very own little sister’s wedding because the lovely Ms. Carey was running a bit behind that day for our mentorship – about four hours behind, to be exact – therefore I wasn’t going to be able to catch a flight to Arizona for her big day. It was definitely a golden problem; nonetheless, it was sad. I should say that despite the fact that Mariah was super-late, she was quite nice, and a good mentor.

Anyhoo, I had sung "Hero,” which was like the token Mariah song. But let’s be honest: My raspy, four-note range was never going to slay a Mariah vocal. So I did the best I could with it, tried to make it my own, just me and a piano – a battle I had fought for the week prior on “Every Breath You Take” but lost to the producers. They were worried that it would look “self-indulgent” to play alone, and I was worried that maybe they were right, so we added the band. After the performance, Simon Cowell said something to the effect that it lost him when the band came in and that I should have just played it solo. We were at a party at Rupert Murdoch’s house (the fact that I just typed that sentence is crazy, ha ha!) the day after the results show, and Simon was there and took a moment to come over and tell me, “Listen, Brooke, you have got to do what you want to do and fight for it, and don’t let anyone tell you no."

Read the rest of this story at yahoo.com