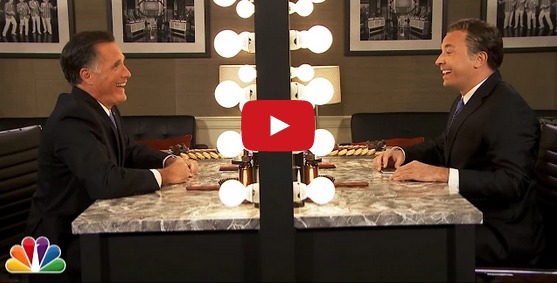 While the Fallon family was on a vacation, they got together with the Romneys for some good clean fun. "We met up, we had a Burger Summit, last summer," Fallon explained when he had Romney on the show March 25th. "And you invited me over to the house. And my wife and my baby."

In truth, he admits, he invited himself with a tweet saying, "@MittRomney I'm available today and could always use a burger #BurgerSummit #nomayo." Romney graciously replied, "Burgers and dogs a-plenty, plus potato salad galore. Come on over, Jimmy. #BurgerSummit."

"You and your wife and your family were so nice to me," Fallon shared, "and I arrived with a hamburger hot dog hat."

He continues, "Gosh, we had the best afternoon. It was super fun, and we were hanging out with the kids. What a great family you have." At one point, he remembers, Romney even called himself "Grandpa Mitt" when referring to his relationship to Fallon's daughter. "You think that every kid is your grandkid," Fallon accused with a laugh.

Talk later moved to a discussion of the Mitt documentary that was released on Netflix last year, and again, Fallon noted Romney's family. "It just showed you and a different side that no one's ever seen," he said. Romney explained, "Netflix was able to look at the real side of running for office which is not what the candidate, and if you will, the tacticians are doing, but what the family's doing. So we got to see my family."

One familial scene Fallon specifically remembers was when Romney picked up trash in his hotel room that his grandkids had left on the floor. "You were about to have the biggest debate of your life, and I'm like, 'what is going on!?'" About the family dynamic, he added, "Your sons are so funny, and everybody's just making you laugh."

Fallon says the entire experience was "fantastic" and "You have to watch this documentary."

Between talk of family and politics, Fallon also brought up Romney's work with Charity Vision, a nonprofit that's working to end treatable blindness. And if you haven't heard, Romney has an upcoming boxing match arranged with famous retired boxer Evander Holyfield to raise money for the organization.

"It's going to be a very quick bout," quipped Romney. And Fallon shared an adorable clip that again brought everything back to Romney's beautiful family: