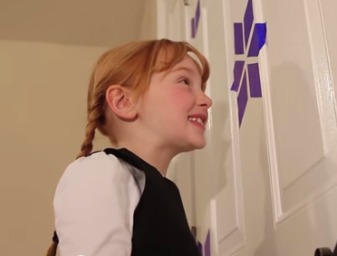 For a grand total of $5.49 and an afternoon of fun, the Bagley family of Riverton, Utah has garnered national attention. Their live-action remake of "Do You Want to Build a Snowman" has almost 50 million hits on YouTube.

Robbie Bagley enlisted his sisters Mia and Ariana to help him film the video. Most of the costumes and props were made from items around the house or borrowed from neighbors: leftover fabric for the dresses, a borrowed DLSR camera to take the video, and a Rock Band microphone for the audio, the Salt Lake Tribune reported. Even Mia's shoes were, which were too large, were held on with duct tape. The $5.49 spent was for the paper to decorate "Elsa's" door.

When the video was first published, it received a lot of attention, getting an average of a million views a day, but over the past week, it's really taken off. Unfortunately, with increasing fame has come increasing criticism, and many YouTube users have taken it into their own hands to defend the two sisters:

"I congratulate these girls. The more popular a video gets, the more criticism it will receive. People will feel the need to be more harsh simply because of the popularity of a video. They feel that it doesn't deserve to be seen by so many unless it meets their own personal standards. They forget that these are just two girls who decided it would be fun to redo a scene in a cartoon and post it online. They forget that these girls are people. I think they did a wonderful job and I congratulate them on their efforts. Don't let people get you down. Keep doing what you love. Keep doing what makes you happy. Don't let anyone take that away from you."

Even if you've seen the original, make sure you check out the blooper reel and get a sneak peak of the Bagley's next project: