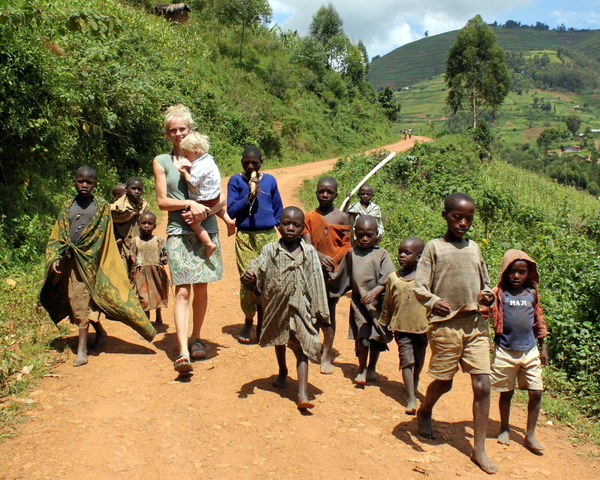 For the Hunt family, service is more than charity—it is a family legacy that has become a world-wide humanitarian organization. Serve a Village, a volunteer nonprofit service organization, became official in 2006, but its roots go back nearly fifty years.

“We have a long family legacy in South Africa,” said Executive Director Alisa Cozzens (formerly Alisa Hunt). “We lived on a large ranch there, and there was a poor village on the farm. My mother took it upon herself to take care of all the villagers. She built a couple of schools and got teachers in them, because otherwise, the kids had to walk—just like the movies—miles and miles on a dusty road to make it to a school that was supported by the government. Also, Christmas was all about taking care of the villagers. My mother would spend weeks and weeks gathering clothes and treats and candy for everyone.”

“As we got older and came back to America, we spent a lot of time collecting and trying to provide for the people back at the farm. The projects just got bigger and bigger over the years. . . . We were pretty good at collecting and sending things—we’ve been doing this for a long time! Forty years!” Alisa said.

Alisa’s daughter Christi (now the director of operations for Serve a Village) participated in health and nursing projects all over the world and inspired the family to expand the organization’s influence to other countries. Serve a Village now has many projects all over the world such as providing for a mother/child health clinic in Kenya, a children’s cancer hospital in Moscow and hospitals in Haiti, not to mention supporting and educating the South African village where it all started: Magareng.

Alisa’s sister Chris Troger said, “We are interested in helping these people physically, medically, spiritually, physically and in every other way. One hundred percent goes to the programs.”

Considering the economic aide the organization gives, Christi said, “Our hope is that we can continue working with the community of Magareng. It is good for us because it is somewhat isolated and the population is not in flux. We can help with building up small businesses since unemployment is at 80 percent. We are hoping to really build that into a model community. Lots of people have received training and been able to go on and get jobs. This is tremendous for this area.”

Christi also described some of the medical assistance Save a Village offers: “We have also been able to provide a building for a crumbling, falling apart day care for the HIV orphanage. We have trained an HIV/TB outreach group. We have been able to help those who have already fallen ill from these diseases. In the clinic, we have been able to give supplies, which have saved many lives of mothers and babies. There is tons of improvement being made, it is really exciting, but there is still a huge need.”

Through Serve a Village, the family has also been the means of spiritual inspiration. Chris spoke of Jackson, a bishop in Kenya, who helps coordinate and distribute much-needed supplies and is fundamental to the physical and spiritual wellbeing of his community. Also, Ronald, a ground director for Serve a Village in Kimberly, South Africa, joined the Church after being involved with the family and the organization. Now his goal is to serve a mission. He used to travel two hours every week to attend church—and he never missed. Many Magareng villagers have become involved in the Church and four have even been baptized.

“We have some really wonderful, amazing incredible experiences along the way,” Chris said.

So how does one best support organizations like this? “In my opinion, the best way is for someone to join us in South Africa,” Christi said. “Because they are able to make a personal difference, they see the person they are serving and grow to love them; they are able to see firsthand the actual living conditions and needs of these people. It changes their lives. So instead of writing one check and sending it off and that’s it, they have done their good deed for their lives, they go and they see it and internalize it. Then for their rest of their life, it changes the way that they live and what they see as priorities and makes them want to help as much as they can.”

This organization believes that one individual can make a huge difference. As Chris said, “When you live there and see the needs of people, it really touches your life and makes you want to do more. Until you actually live and see it, you don’t realize what an impact you can make.”