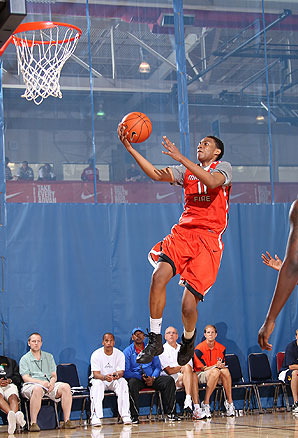 Before Jabari Parker takes the floor to play a basketball game, he sits by himself in the locker room for a couple of minutes of prayer and reflection. "I pray that God keeps me safe on the floor, and that I'm able to have a good attitude towards my teammates," he says. When the game ends, Parker heeds that higher calling by rushing to be first in line to shake hands. "I just want to show the opponents that I'm grateful," he says. "I want to show good sportsmanship."

In between those displays of piety, Parker reveals something that is truly divine: a game as good as his attitude. A 6-foot-8, 220-pound rising junior at Chicago's Simeon High, Parker is a lithe, graceful, intelligent swingman who has the length and athleticism to play power forward, yet dashes and darts with the ball like an expert point guard. He sinks feathery three-pointers as easily as he drops in finger rolls at the rim. One college assistant coach who is recruiting Parker says he reminds him of Grant Hill, "except Jabari is a better shooter."