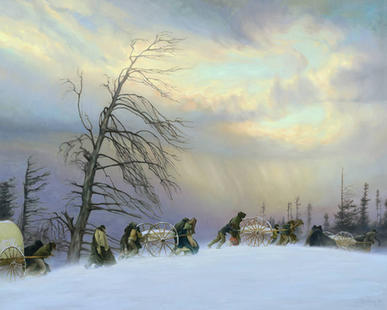 The Blessings of Willing Obedience: a Martin Handcart Story

Isaac John Wardle began working in the coal mines in Ravenstone, England, at the tender age of 7 — six days a week, 12 hours a day. That would have been his destiny until he heard the gospel preached, joined the LDS Church at age 17 and determined to emigrate and gather with the Saints in the Utah basin. After three years of scrimping and saving, Wardle booked passage on the ship Horizon, said a final farewell to his family and sailed from Liverpool in May 1856. After disembarking in Boston on June 30, 1856, Wardle climbed aboard a train, eventually arriving in Iowa City, Iowa.

He joined the Martin Company and built a handcart. Late in the season, supplies were scarce, and many of the Mormon handcart pioneers used green, undried wood.