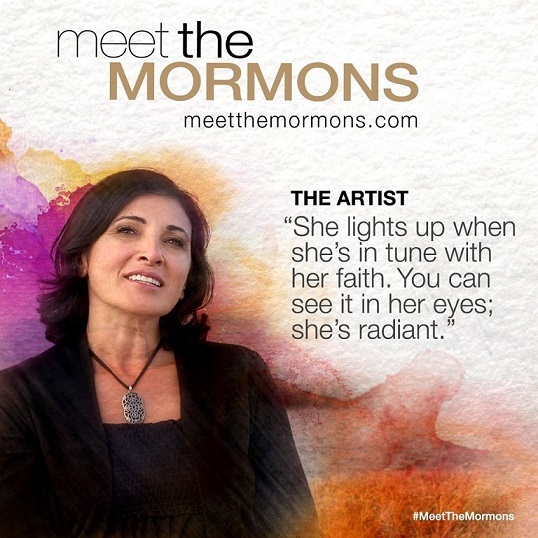 The Story You Didn't See in Meet the Mormons

So you think you’ve “met the Mormons.” You’ve heard the news and seen the stories.

But while this Top 40 Documentary of all time features six stories from all over the world, there’s a seventh story you haven’t heard yet.

Giovanna Raccosta Nezhati is a nationally renowned artist living in Las Vegas, Nevada. Her story is told exclusively on the Meet the Mormons DVD and focuses on balancing her marriage with her nonmember husband while putting her faith into action to serve others.

Converted at 16, Giovanna served as missionary in her homeland of Italy. Afterward, she immigrated to the United States where she met her Iranian-born husband, Bardia Nezhati. Though he didn’t share the same religious beliefs as Giovanna, she still loved him. “I felt like he was someone with my same principles,” she said about her husband. “I loved the way I felt this nice connection with him.” Originally, their different backgrounds didn’t create much of a conflict. However, after their children were born, they realized they lacked a common ground on which to raise their children. “As we had kids, we had to find out what religion to teach the kids, what the morals [were]. It got harder and harder because we couldn’t agree on anything.”

Eventually Bardia, out of fear of losing his own identity, forbade Giovanna from discussing the gospel among the family or with others. “And what are you going to do, fight about it?” Giovanna said. But while the restriction on religion removed the arguments, something else also left their relationship. “What went away was me. The whole Giovanna, who I was, what I believed, the excitement, the spark was gone.”

For 10 years, she respected her husband’s wishes, until in 2009, some of her Mormon friends reconnected with her through Facebook. “They pulled Giovanna out of the darkness,” she said of herself, remembering her friends bringing her back to the gospel. “They reminded me who I was. It was a rebirth.”

Of his wife’s spiritual reawakening, Bardia said, “She lights up when she’s in tune with her faith. I see a different person in her. You can see it in her eyes. It’s radiant. It’s just glowing. And when she communicates with people, she’s effective—she’s alive. She’s mesmerizing when she talks about it. Now I know enough about it to give her space and support her in this.”

But their newfound understanding was about to deepen. Two years after Giovanna renewed her connection to the gospel, she woke up one night full of ideas to help feed the homeless. She pulled out her laptop and began putting her ideas together. “It was loud and clear,” Giovanna said of her ideas.

“It was loud and bright,” joked Bardia, recalling the night. At the time, Bardia didn’t understand the entirety of his wife’s inspiration. “If I knew what she was working on (which I did the next morning) I would have woken up the kids.”

The next morning, Giovanna sent out messages across Facebook and within two hours, she had 20 people helping her with her plan, “Dinner on Us.” Within a few months, those 20 people became 150. Grocery stores, restaurants, and other people began donating food as well.

Every first Saturday of the month, these people came together to serve the homeless. But Giovanna’s idea wasn’t just to fill the kitchen with people. She invited dancers and singers to provide entertainment, turning a meal into an event at the Las Vegas Rescue Mission.

“It’s not just feeding them,” Bardia says. “Anybody can feed. Anybody can bring food and just hand it to people. What she’s doing is giving them dignity; she’s giving them class. For that one day a month, she’s making them feel that they’re important. That there are all these people outside that love them, that care for them, that want to provide an event for them.”

“Never in a million years would I ever imagine this happening here at the mission. I’m walking on air,” said Michael, one of the countless individuals Giovanna has served.

Giovanna recalled one instance where she knew her service paid off. “There was this lady who came to me and she said, ‘Giovanna, I really enjoy your food, it’s amazing. But it’s not just the food that I see in here. I feel love. I feel God’s love. I feel happiness.’

“This is the true work of God. President Monson said, ‘Unless we lose our life in the service of others, there is little purpose in ours.’ He couldn’t have said it any better.”

See all of Giovanna's story in the special features section on the Meet the Mormons DVD.