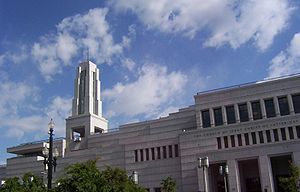 The future of Mormon 'mega-projects'

One of the Europe East area goals is to bring the Church of Jesus Christ of Latter-day Saints out of obscurity. This is a goal that the church as a whole has as well. Mega-projects can play a vital role in bringing the church out of obscurity in addition to the practical benefit of the project itself. Mitt Romney gave some practical marketing advice in his book Turnaround. He said that if you have 12 roses you don't split them up and put them in different rooms, you put them all together in a single large bouquet to gain attention and create a wow factor. This can be true of mega-projects as well.

Mega-projects have been important to the church for ages. Some may tend to think that they were only a result of President Hinckley's visionary presidency (BYU-Idaho expansion, Conference Center, City Creek, mass construction of temples), but this is not the case. Mega-projects were done before and after President Hinckley's presidency (BYU Jerusalem center and the I'm a Mormon campaign). From this list we can note several interesting aspects about mega-projects. First, they come at an extremely high cost, second, they greatly vary in type but all produce a wow effect that either better the church's brand image or increases excitement and visibility towards the church.

Read the rest of this story at realclearreligion.org