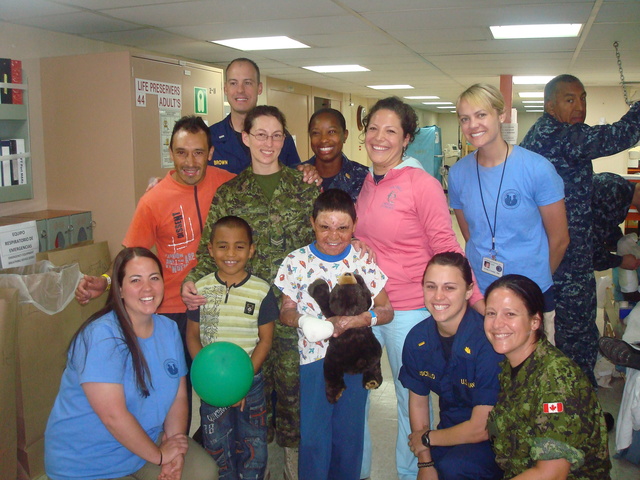 The USNS Comfort has just returned from a five-month mission to nine countries, where it was able to help more than 56,000 people.

The Comfort is part of five-year running mission, Continuing Promise, which pairs US Navy with nonmilitary NGOs (non-governmental organizations), including The Church of Jesus Christ of Latter-day Saints, to provide medical attention and other services to nations in need. But in 2011, the people who received medical help weren’t the only ones who were blessed, and the medical help wasn’t the only type of aid administered.

“These volunteers have sacrificed so much—for eleven of them, five months of their life—to come serve people who don’t have the means to get needed medical care,” said Dr. Susan Puls, a Latter-day Saint volunteer medical coordinator. “This service is given because these volunteers want to spread God’s love by sharing their talents and skills to bless others’ lives.”

In early 2010, volunteer Emily Forster, a University of Calgary graduate in nursing, heard that a devastating earthquake had struck Haiti. “I [felt] that I had been really blessed in my life; [I] just wanted to do something,” she said.

While at work in the Emergency Department of a hospital in Arizona, the topic of Haiti was brought up when a co-worker announced she was going as a volunteer. “When she said that, the Spirit just came over me so strong and told me, ‘You need to go to Haiti.’ It was something I knew I needed to do.”

Spending approximately 12–14 days in each country, the Comfort enabled volunteers to teach medical training classes while patients needing surgery were flown aboard the ship by helicopter, where they were treated and remained for a short recovery. Meanwhile, additional volunteers traveled to shore in a 40-passenger boat each day to set up temporary clinics in schools and community centers. At each stop, medical personnel and volunteers performed surgeries ranging from cleft palate reconstruction to cataract repair.

“With the cataracts, for example, that was amazing because it gave them sight, something they may not have had for years and years or maybe ever,” Forster said. “I’ve never been without sight in my life, so I didn’t understand the impact and what a big deal it was for them.”

Forster would care for patients after surgery on the ship until they were ready to go home, spending five hours to five days with each patient. “It was really hard work because the hours were so long. I would work 12-hour shifts with no breaks, days and nights, and then there were two to four days on the ship between countries, and then we’d do it all over again. It was pretty exhausting, but it was definitely worth it.”

From April to August of this year, the Comfort traveled to nine countries through Central and South America and the Caribbean. Along with Haiti, the USNS Comfort visited Jamaica, Peru, Ecuador, Colombia, Nicaragua, Guatemala and Costa Rica. Besides the long hours and strenuous workload, volunteers faced other challenges as well: “There was so much need, and [we were] not be able to help everyone,” Forster said. “There was only so much we could do. It’s human nature that makes you want to fix everything and help everyone you see,”

In addition to medical support, the Comfort brought 200 pallets of humanitarian relief supplies that were donated throughout the participating countries, as well as veterinary and engineer support.

The volunteers brought another type of support to the people as well: “Letting them know that someone cares about them and that there is hope for them,”  Forster said. “We weren’t allowed to actually proselyte to them, but to be able to show them that Heavenly Father is aware of them and cares about them, I think a lot of them sensed that.”

When the mission was over, the USNS Comfort returned to its berth in Baltimore in the following week. The opportunities that the Comfort was able to give were not limited to the people it served but reached the volunteers as well. “As I came out, I decided I would go back to school because I saw more how helpful it would be to be a doctor or nurse practitioner as opposed to a nurse,” said Forster. “Here in North America we are given so much more and so much more is expected of us. But our challenges are different; what we deal with is different from what they deal with.”

This is the Comfort’s third Continuing Promise mission. “There is a lot of need wherever you are, if you look for it you can find it, you don’t have to go on big medical ship to nine different countries,” Forster said. “There’s so much need everywhere, maybe not all physical and health, but maybe just a smile, or a kind word to someone can make a world of difference. That’s the main thing I got out of it—to have that service attitude and always be looking for ways to help out.”