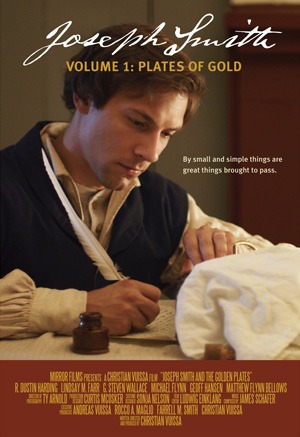 {A&E} Watch This: Joseph Smith Volume I, Plates of Gold

A lot, it turns out. Plates of Gold shows Joseph and Emma as you’ve never seen them before. Much of the time, they’re not the older, charismatic leaders who always know what to say and what to do.

We see Joseph struggling to understand his role in the world, asking, “What if I disappoint the Lord?” We see him get angry and snap back at times, then cry and go through all the motions of someone heartsick and heartbroken at others. We see the giddy excitement of a young man—a boy, almost—practicing repeatedly to ask for a young woman’s hand in marriage. We see his insecurities as he attempts to know exactly whom he can trust and exactly how much and with what he can trust them.

We see Emma as a sometimes snide young woman who retorts sharply to other suitors who think themselves better than Joseph. We see her as a playful girl who can’t stop giggling while hiding from (and spying on) an unwanted suitor. We see her not as the traditionally stoic woman but someone who borders on complaint when trials are heaped upon them or she isn’t allowed to see the plates when so many others are.

But for all these weaknesses portrayed, we grow to love these truly human characters even more. And for every flaw manifested, the triumphs and strengths become that much greater.

The story may seem to start off in an odd place, skipping over the First Vision, Moroni’s visits, and Joseph’s first time seeing the gold plates completely; Joseph and Emma are already in love, Alvin is already dead, Hyrum is getting married, and the Smith family is about to lose their farm. But that’s because the main goal of the movie does not seem to be to spread the gospel, although certainly it can be a tool in doing so. This is a vehicle for telling the intensely personal story of two people who found themselves suddenly a-swirl in the middle of something much bigger than themselves, and how they grew to fill that role.

“The angel told me that I would never receive them if I’m not ready next time. I don’t know if I’ll ever be ready,” Joseph worries. “Why did the Lord choose me? I’m poor; I can hardly write a single sentence.”

His wise father responds: “It is your strong desire to do the right thing.”

And as we watch the movie, it is that strong desire to follow God’s plan that is able to gradually triumph over all as we watch the young Joseph and Emma grow and progress. As director Christian Vuissa explained, the greatest message he hopes for people to walk away with is that of Alma 36:6–7: “By small and simple things are great things brought to pass . . . and by very small means the Lord doth confound the wise and bringeth about the salvation of many souls.”

Along the way you’ll learn more about the history of the Church and likely come away with a greater appreciation for the gospel, but the greatest gift you will walk away with is a greater understanding of the Prophet of the Restoration, who gave his all so we could enjoy that gospel as we do today. And, most importantly, you’ll learn that Joseph—the prophet who did and gave so much for this gospel—really was just like you and me. Which means that no matter how small and simple we think ourselves, we too can accomplish great things in the Lord’s work with his help.

Kaela Worthen is the associate editor at LDS Living. A self-titled "ultimate grammar nerd," she also battles serious addictions to news and food websites and a compulsion to dance to the radio while driving.