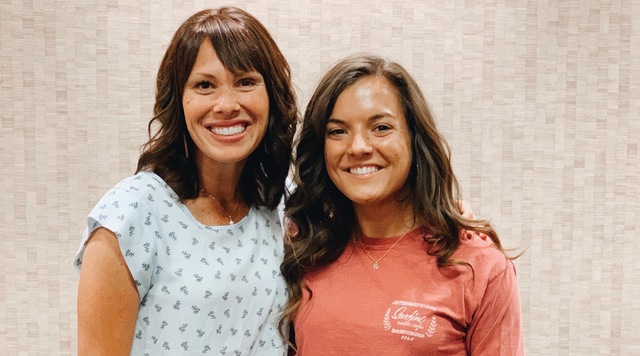 "All In" Podcast: Brooke Romney Shares Why Sometimes Trying Really Is Enough

Yoda famously said, “Do or do not, there is not try.” However, as a mother of four sons, Brooke Romney revealed on this week’s episode of All In that at times she feels discouraged. Romney used two examples of lessons learned along the road of motherhood to illustrate how she has found that often simply trying is enough. “God recognizes effort,” she says.

Morgan Jones: I think sometimes we don't manifest true confidence or self-worth for our children, or for those that are younger than us in my case. So for you, how would you say that we can better model true confidence and self-worth as we strive to have better connections in our lives?

Brooke Romney:Well, I thought, when I was a teenager, the minute I got married all of my failures and inadequacies, all my temptations, all of that would just go away and I'd be this adult who never felt sad and who never felt insecure, and all those things.

MJ: I think we all think that. I have this distinct memory of thinking, at some point, I'm just going to understand finances completely because I'm an adult.

BR: Because I'm an adult, right? It's just going to work like an assembly line at Ford Motor Company. And it's just going to be clockwork. And I've been surprised at how challenging so much of growing up as an adult really is. And I thought I would never feel insecure when I wasn't worried about getting asked to dance. But we do feel those things and I think we feel those things so that we can have empathy. I think we're supposed to feel that way. I was supposed to sit alone at a party so that I could remember what it felt like to sit alone and so that I would reach out and be better the next time, so I wouldn't just get so comfortable in what it felt like to have friends. But I think if we start understanding our worth, if we start understanding where we come from, what we're capable of, and then if we're willing to be on the path that God has laid out for us, our unique path, then I think we can have a lot of confidence even when things aren't going right, even when we're feeling like nothing's measuring up.

I was in a yoga class not too long ago. And it was the end of class, so [the instructor] was doing some guided meditation. And so, she said, "I want you to fill in this blank: I am ______." And so she started with all these words. And she said, "I am fabulous; I am smart; I am successful.” She's going through this list. And I was in a bad spot. Some things were going on in my family that were so hard, and I was feeling like a failure. And I could not honestly say any of those words, and it was so hard. And I was just sitting there in the quiet and the word "trying" came to me. And I said, “I can say that word. I am trying. I am trying, and it's not working out. But I am trying. And right now, that's about all I've got." And then the Spirit confirmed that that was my word and that was enough. Trying in that moment was enough.

I think as we help our children understand that trying is enough, progression is enough. And sometimes things don't work out because this is life and it's hard, and it's supposed to be that way and we're supposed to grow and learn. And then we're supposed to find happiness in the trying. We're supposed to find peace and reassurance as we're trying. And I think, in our relationships with our kids and connections with others, putting that effort. God recognizes effort. He understands our hearts. And when we're doing those things, He's going to make up the difference. And it's not going to be tomorrow. All [of] my problems didn't go away because I felt confident with my place with God. But I was able to get through those times and I was able to say, “Trying is enough.” As we teach our children that, you know, maybe we don't have the happiest family right now, but we're trying. We're doing those family activities. We're saying family prayer.

A few years ago, we were trying to have morning scripture study. And it was going really well for all but one of my children, and he was not interested. He was not interested in scripture study. And he was certainly not interested in waking up early to have scripture study. As parents, we really like our kids to do the right thing. And we like them to do what we want them to do on our timetable and all those things. So when he wouldn't come to scripture study, there was a little bit of a different vibe from us as parents. We were a little bugged; we were a little annoyed. And then every now and then he'd accidentally make it to scripture study, and then we would be very happy and very encouraging. And he came to me and he said, "Mom, I feel like you guys only like me when I come to scripture study." And it hit me so hard, because I thought, “These are the words of Christ that I'm reading. And He didn't have a caveat whether He loved someone or not, whether someone was welcome, whether He was happy with somebody. You didn't have to do all the right things to be loved by Jesus.” And as a parent, I never wanted to feel that way again. So it was off the table. I wanted my children to see that the gospel brings me joy and purpose and teaches me how to love in a way that nothing else has ever been able to teach me how to love, so I need to be an example of that. And so, scripture study was optional, and we love it if [he] would come. And if [he] didn't, we still love him and we were still happy with him. And I think it's really important for our kids, especially in this day and age when so many of them are dealing with so many things, to know that there's unconditional love from their parents, and when they feel that connections happen. I think we can be guaranteed of those.

Listen to the entire episode by clicking here or read a full transcript here.