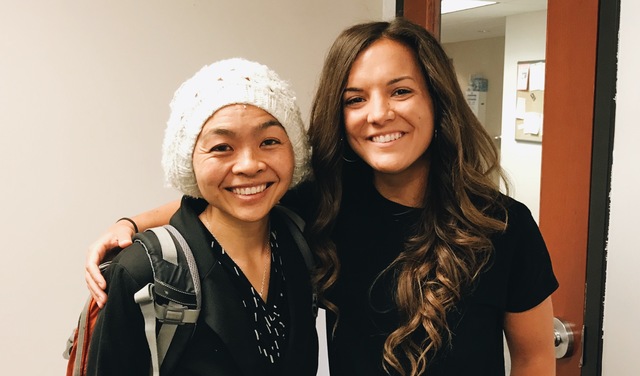 "All In" Podcast: Scholar's Analogy About Why Complexity Can Help Our Testimonies Grow

In her new book, Crossings, Melissa Inouye writes, “The miracle of Zion's one heart and one mind was not that all members of the community had been born identical, but that they had chosen to love and serve each other despite, or perhaps because of, their diversity."

On this week’s episode of All In, host Morgan Jones spoke with Inouye about diversity in the Church and how she believes we can better love and support those who may think or feel differently than we do.

Read a portion of their conversation below or listen to the entire episode here.

Editor’s Note: The following transcript has been edited for clarity.

Morgan Jones: What can we do, Melissa, do you think on an individual level to create . . . unity in the Church?

Melissa Inouye: I think one thing we can do is try to actively seek out people who are struggling for various reasons. It's obvious to see people who have physical difficulties, who have been in a car accident, people who need to move house, people who have just had a baby, who need meals—these kinds of things we're really good at noticing. I think we could be a little better at noticing where people are feeling spiritually fragile or feeling fragile in their faith, or feeling like they don't belong. We could do more to reach out to people and make it clear that we're there to support them, even if that support may be a bit . . . may stretch us or make us feel a bit uncomfortable. It's, you know, it's a lot of work to help someone move. I've participated in many Latter-day Saint moves, and you're like schlepping their massive bed and their flat screen TV, and their super heavy chest of drawers like, “Why is this wood so heavy? This is a really heavy chest of drawers.” But, like, that is that's a no brainer for us, right? It's really easy.

MI: Right, but we can also show up in those other ways. And in the book, I have an essay called conversations are like casseroles. You know, it's like a no brainer again—just like throw together a casserole and then send that off to someone. But often it takes much less time to try to engage with someone on a slightly uncomfortable topic. But we should do that too. That's also a form of work, and we shouldn't shirk, as the hymn says.

MJ: Yeah, I think that's so good. One thing that it made me think of, we had Jane Clayson Johnson on the podcast previously. And she talked about how when you have broken an arm, you have a cast. But we don't wear a cast on our heads when we are struggling mentally. And I think that if we did, it would be so much easier for people to know when we're struggling. But one thing that I think we have a hard time with is letting people know when we're in need of help mentally or emotionally.

MI: That's right, and especially if it has to do with faith because faith is something that's so precious. We work so hard to protect it. And sometimes we worry that if someone is having a faith struggle or having some doubts that it will be kind of like a contagion—that it will infect us and weaken our own faith. But I think if we look at the example of Christ in the scriptures, He interacted consciously with a lot of people who were literally contagious, like with lepers, and also people who are considered ritually unclean. You know, if you were with them according to the kind of local religious traditions, you know, you would have tainted yourself. You would have broken your own purity. But Jesus was . . . He hung out with publicans and tax collectors and adulterers. As Sharon Eubank said in her general conference talk, you know, Christ hung out with all of those different kinds of people, and He was fearless in doing that. So, I think that if the Savior is our example, we can follow that example. And I think it will be okay.

MJ: I think that's such a beautiful thought. Just a question for you—kind of follow up to that. I think sometimes, one thing that I have observed in my life recently is that there's this idea within the Church, and I think part of this stems from parents that have tried so hard to teach their kids the gospel. And so then when their kids have questions or doubts or go a different direction, they feel heartbroken. And I think sometimes then, that creates in those of us, even who are still in it, kind of this fear to explore our doubts or our questions, and to feel like we can't be honest about them because we've seen other people be brokenhearted about others leaving. How do we kind of sit with those people in those spaces? How do we feel comfortable kind of engaging in those conversations? You mentioned that idea of contagion, and I love that because I think that that's so true, but at the same time, like I don't feel like for me that the problem is feeling like it's going to be contagious, but I just don't know exactly what to do to be there, you know? Do you have any thoughts on that?

MI: I do I have a lot of thoughts on that, actually. So, we can remember that the first and second great commandments are to love God and to love our neighbors as ourselves. So, and as I think it was Ulisses Soares who also said in general conference when people are having doubts, don't judge them, don't criticize them, just love them. And I think that's the most basic thing we can do. Someone suggested as a response to someone who was expressing doubts or saying they were going through a faith [transition], what we can say is, “I love you, and I respect you, and this doesn't change anything.” So often, people are worried that, you know, if they if they go through a faith transition, and they feel differently about the gospel, or about the Church or whatever, that they will be rejected by their family and by people who they previously called brothers and sisters. And that's an extremely painful process. So just committing to love people to respect people and to say, "This doesn't change anything," opens up that space for people to share what they're going through. We can say, “You know, tell me. I'd love to hear what you're thinking and what you're feeling and what you're going through.” And then more broadly, with regard to, you know, how do we work through difficult questions, I think we can have confidence in the fact that anything that is real is quite complex, right? I mean, like the human body is very complex. Nature is complex. Only in a very artificial situation does everything kind of fit together.

Sometimes I use this analogy of like a sandbox. So, a sandbox is a very sterile environment, from a certain point of view, like you've got these grains of sand, and they're all the same kind of thing, and it's pretty clean, and kids play in it. But things don't grow in it. Things don't grow in sandboxes unless the sandbox gets really dirty and it fills with dirt. But you know, things don't grow on sandboxes. Where things grow is in dirt, which is muddy and mucky and full of microorganisms and bugs and worms and things like that. So, the earth that we have here, the life that we have here is fertile. It's messy. It's complicated. The things that are real work in that space.

I think sometimes, perhaps, especially like when we're teaching Primary kids, we do need to oversimplify some aspects of the gospel, and we don't teach Sunbeams about polygamy or anything like that. But as we kind of mature and become more able to handle complexity, I think we can have confidence that we can handle it. I mean, if the Church were the Wizard of Oz, and we wanted to kind of keep the curtain over the wizard, then it would be sensible to freak out about difficult questions. But we believe that we are guided by Christ and that Christ is here with us and what is true and from God can withstand scrutiny. What I mean by withstand scrutiny means that we will inevitably see that we have made mistakes. As I study Church history, as in all religious histories, I see that people have made mistakes. There are things in the past that we would clearly say are wrong. But this is what happens when people do stuff. And what is a church but a community of people that's trying to follow God. So, I think we can be sensible and also ultimately confident that the more things we learn, provided they're not, you know, overtly deceptive, are things that will ultimately bring us closer to truth and to a true understanding of reality.