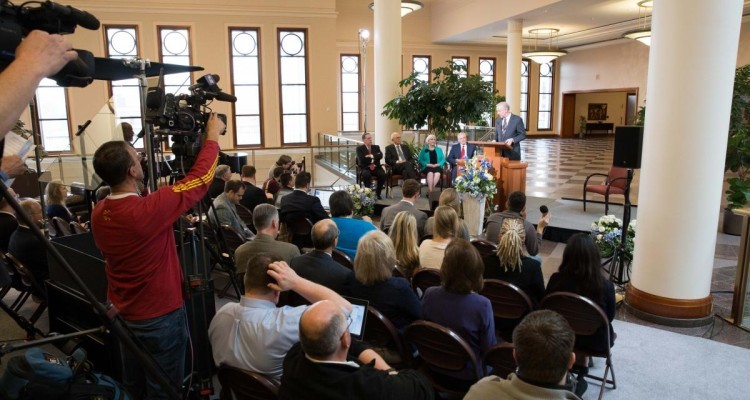 In years past, we've seen some pretty strange Mormon news stories break on, what other day, April 1st. Make sure you know which stories are true and which are pulling your leg with this list of funny LDS news from April Fool's Day, 2015.

Be sure to check back throughout the day as other stories "break" and are added to this list!

It may be that you heard this information a "a small press conference" this morning. Or, as this article suggests, "It may also be that this whole article is just an April Fools Joke and that all you returned missionaries who really wanted this to be possible should give yourselves a pat on the back for getting excited about serving a second mission!!!"

According to LDS Buzz, the Church lowered the age of admittance to Sunbeams from three to two.

"This announcement comes at the heels of the 2012 decision to lower the mission age. The general primary presidency stated that they have been very impressed by the spiritual maturity of many two-year-olds in the church and feel like the time has come that they begin their primary education even earlier."

They also supposedly announced some changes to other primary class curricula, including having CTR classes memorize the Family Proclamation and The Living Christ.

Good thing they decided to do this all on April 1st!

Purportedly a way to reduce the number of fights in Sunday School, Utah Politico Hub "broke the news" that the Church will announce this weekend a division of wards based on politics instead of geography. An interesting notion, but as the article itself points out, this sort of move would be "creating two separate Churches — the Conservative Church and the Liberal Church.  We need to be one church, one doctrine.”

As exciting as a change like this might be, it's not something that'll happen anytime soon (or really ever).

Given Harry Reid's recent announcement that he's going to retire (not a prank), this picture of a TV announcement posted to Facebook almost had us going! But rest assured, it's just a hoax.

Mission Age Changes for a Second Time by Mission Geek

The original missionary age change was a big deal--and if this announcement were real, it would be even bigger!

According to The Mission Geek, "Sister Missionaries will now be able to leave for missions as soon as they have 'completed their high school certificate or equivalent.' The news has been welcomed by Utah’s fair opportunity group and woman’s rights groups around the world." That would mean some could go as early as 16!

But this one's a hoax, as the article itself admits: "It is expected that Sisters around the world will be relieved of the inaccuracy of this article."

If you read this heading and nearly had a heart attack, you're not alone.

This article outlines how the Church "announced" changes rolling out in coming weeks for a new Church meeting system, with "elective" courses for members in the additional time they'd meet on Sundays.

Our favorite part of this prank was the supposed course offerings:

Sounds fun! If only it were real.

According to the Religion News Service, LDS author Ronald Jared Sorensen released a new book today detailing his account of dying and going to heaven. (Of course, he was resuscitated, so he can share the story.)

In the write-up, Sorensen describes what his forray into "heavenly tourism" was like, including the work he's put to, even during the short amount of time he had died. “Right away, they put me on an eternal missionary rotation. They paired me up with this guy who never stopped smiling to go preach the gospel to the dead. Forever! I mean, I served a mission for two years of my life and was glad to do it, but that doesn’t mean I want to knock on doors for all eternity,” Sorensen explained.

It's a funny thought--which is why it's such great April Fool's Day fodder.