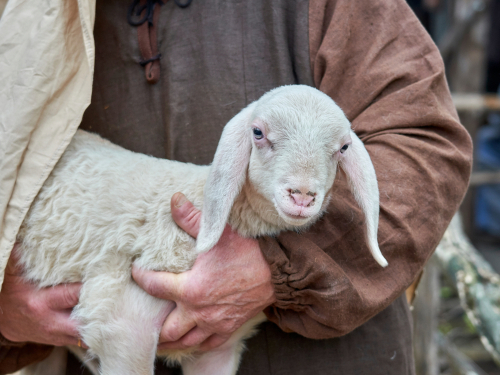 “I find abiding peace in knowing that ‘the Lord is my shepherd’ and that each of us is known by Him and under His care. When we confront life’s wind and rainstorms, sickness, injuries, and drought, the Lord—our Shepherd—will minister to us. He will restore our souls. … As children of a loving Heavenly Father and as sheep in His flock, we enjoy the blessing of being individually ministered to by Jesus Christ. Simultaneously, we have a responsibility to provide ministering assistance to others around us as shepherds ourselves. We heed the words of the Lord to ‘serve me and go forth in my name, and … gather together my sheep.’”

“My sheep hear my voice, and I know them, and they follow me.”

Start your lesson by telling your family they are going to play a game of Simon Says. Select one person to stand up and be “Simon” and then tell everyone to follow everything that Simon says whenever he or she says “Simon Says,” but whenever Simon doesn’t say “Simon Says” and someone follows the command, that person is out of the game for that round.

After playing a couple rounds of Simon Says, ask everyone, “What does Jesus say?” Read John 10:27, and then discuss answers to the question: “How can we hear what Jesus says? And how do we know it’s His voice?”

Talk about modern revelation that comes down through the prophets and apostles. Discuss some of the recent things that Christ has been revealing through His prophets and how we can do as He says. Talk about how Christ ministers and speaks to us individually—knowing us but name—and how we can follow His example in ministering and loving others (see “Thought”). Then read the story below and discuss ways your family can help Christ as He shepherds souls.

Read Elder Gary E. Stevenson’s story about a shepherd and think of what we can learn about helping the Savior as we minister to others:

My friend of many years spent his life as a rancher, doing the hard work of raising cattle and sheep in the rugged Rocky Mountains. He once shared with me the challenges and hazards associated with raising sheep. He described that in early spring, when snow on the expansive mountain range had mostly melted, he placed the family herd of approximately 2,000 sheep in the mountains for the summer. There, he watched over the sheep until late fall, when they were moved from the summer range to a winter range in the desert. He described how tending a large flock of sheep was difficult, requiring early days and late nights—waking well before sunrise and finishing long after dark. He could not possibly do it alone.

Others helped tend the flock, including a mix of experienced ranch hands assisted by younger hands who were benefiting from the wisdom of their companions. He also relied on two old horses, two colts in training, two old sheepdogs, and two or three sheepdog pups. Over the course of the summer, my friend and his sheep faced wind and rainstorms, sickness, injuries, drought, and just about every other hardship one can imagine. Some years they had to haul water all summer just to keep the sheep alive. Then, every year in late fall, when winter weather threatened and the sheep were taken off the mountain and counted, there were usually more than 200 that were lost.

…The Lord Jesus Christ Himself said, “I am the good shepherd, and know my sheep, … and I lay down my life for the sheep.”…In the same way that my friend tended his sheep with the assistance of young and old ranch hands, horses, and sheepdogs, the Lord also requires assistance in the challenging labor of caring for the sheep in His flock.