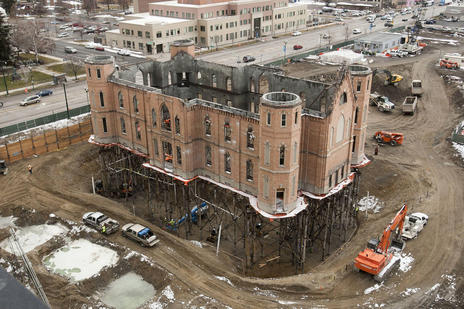 Construction on Provo Tabernacle gets off the ground

PROVO — The bricks are still scarred from fire two years ago, but the Provo Tabernacle is on track to become the LDS Church's second temple in Provo.

From a distance, the Provo Tabernacle appears to stand as it has stood since the late 1800s. But upon closer inspection it floats above the ground, held in place by a network of steel supports.

“It was unbelievable,” Donnette Perkins said after seeing the construction project. “I wouldn’t want to be standing under it like those guys are, but it looks like it is pretty solid.”

Since The Church of Jesus Christ of Latter-day Saints held a groundbreaking for the new temple on May 12, 2012, crews have reinforced the interior walls of the tabernacle with rebar and concrete. Now the site is being excavated for what will become a basement in the new temple.