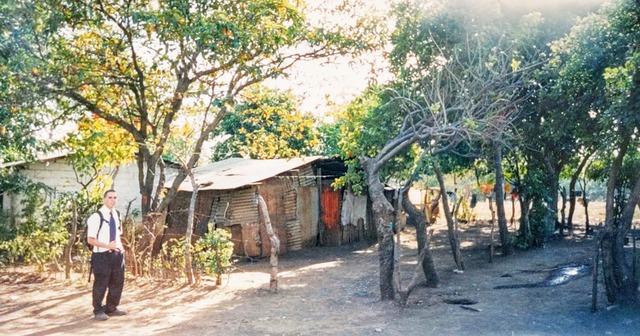 “Find My Family”: How a Deceased Father’s Words Guided a Missionary to Teach This Family

Four days into the MTC and Matt knew learning Spanish wasn't going to be easy.

As the first in his family to serve a mission speaking a language other than English, he had expected a gift-of-tongues experience where the Spanish he would need to serve in Nicaragua would come naturally.

But it didn't happen. And combined with homesickness, this discouragement had left Matt at a very low point in his mission.

"I began to wonder, 'Can I even do this? Is it worth it?'" Matt remembers. "And I had a very clear message come into my mind. It was the voice of a man, nonaudible but almost felt audibly, and he said, 'Elder Hill, pick up your head. I need you to find my family.'"

It was an experience like none Matt had ever had before, but it barely made it as a last-minute thought in his journal entry the next day. The reason? Matt had already been promised that others would be prepared ahead of his mission to hear the gospel.

While preparing for his mission, Matt had the opportunity to go through the temple for the first time to receive his endowment. It was there, in that holy, quiet place, that Matt felt the presence of his grandfather, a man who passed away before Matt was even born.

"For me to have an experience where he's there, it seems like this would be something kind of out of that world, but it just felt so natural," Matt says. "I knew that it was my grandpa. And I'm not sure how I knew that. I could see him in my mind's eye. And I absolutely felt that it was him. I knew it was him."

Matt says he could feel his grandfather's approval of serving a mission, but more than that, he could perceive there was a message his grandfather wanted to share with him.

"He told me that he had come to tell me he was going down to prepare the hearts of people that I would come in contact with and to give me a bit of advice. . . . He told me that, 'While on your mission, I want you to make sure that you are obedient to the mission rules,'" Matt says. "Because I will find protection and safety through my obedience. And then he said, 'I want you to go home and I want you to tell your mother that you will be protected on your mission. She is worried about you, where you've been called to serve.'"

Up until this point, Matt had no idea how worried his mother had been as he had prepared to serve in a foreign country. But when he got home and shared the message his grandfather had for his mother, her tears confirmed what he had heard in the temple.

Just as these words comforted Matt's mother, the words from an unknown, unseen stranger in the MTC also strengthened and comforted Matt. Which is why, three months later, Matt found himself in a small neighborhood in Nicaragua preaching the gospel.

While in this particular neighborhood, Matt couldn't help but notice a group of children outside a home. For some reason, Matt felt impressed to ask his trainer if they could introduce themselves to this family.

At this time, Matt says he didn't speak very much Spanish, but as he and his trainer walked into this home, a picture on the wall caught his eye. It was a picture of a police force with some 15 to 20 members. And for some reason, one man, in particular, stood out.

"With my limited abilities in Spanish, I said, 'Quien es el?' Which meant, 'Who is he?' And I pointed at him," Matt says. "And the mom, as she was knitting, she put her head down, and she began to cry. She said, 'He was my husband. And he was shot and killed this last year.'"

Immediately, chills rippled down Matt's spine and the hairs on his arms stood on end. He knew this man. Though half a world away and now beyond the veil, this man, this stranger was familiar. Matt says at that moment, he could feel the Spirit confirm to him that this was the man he had heard in the MTC and this was the family he was supposed to find.

But when he told his trainer that he felt that this family was ready for the gospel, his trainer's reply wasn't what he expected.

"I said, 'Elder, they're going to join the Church. They're going to accept the gospel.'" Matt says. "And he looked at me, and he kind of chuckled, he says, '. . .  You know, when I was new, I felt the same way about everybody I came in contact with.' And I left it at that. He was getting close to going home, and I didn't feel like the moment was right to share the experience I had."

However, when Matt shared his experience with a new companion, both felt it was the right time to teach the family the gospel.

"He [Matt's new companion] said, 'Elder Hill, if we do nothing more together with the time that we have then help this family by giving them every opportunity to join the gospel, I believe our time together will have been a success,'" Matt says.

Though both spoke little Spanish, Matt and his companion didn't give up in their efforts to teach this family. And a few months later, the mother and her daughters were baptized.

While Matt never did express the experience he had at the MTC just four days into his mission to this family, he found out the Sunday after the mother's baptism how the family had been prepared to receive the gospel before he even stepped foot in the country.

"She said, 'Ever since my husband passed away, I have felt the yearning to come to this church,'" Matt says. "'And I haven't known why. Now I know why.' She said that this gospel, with the limited time she has spent in it and learned about it, has brought her so much peace and joy. And she is convinced that her husband is super happy with her and her daughters' decision."

Matt knew then that he had only been an instrument in bringing this family to the gospel. He hadn't converted this family, the Spirit had. And he wasn't the only one who had labored to make sure this family had found the gospel: others who had passed on before had also worked to bring this family that opportunity.

Now as a father himself, Matt says he understands why that stranger spoke to him that day in the MTC, "I understand the longing that must be present there as he watches his family live their lives in his absence," Matt says. "It helps me to know that I would do the very same thing. That I would do anything in my power to help my family in any way possible."

To this day, Matt doesn't know why he had those two unique experiences with angels, "But I do believe that our Heavenly Father does know how to reach us," Matt says. "And oftentimes I think the way He chooses to do that is different for all of us. The gospel of Jesus Christ is very important to those that are living and those that have passed on. I've learned that our Father allows those on the other side to be very much a part of the work that we are doing here."

Listen to the full episode, "Angels Among Us," below or click here to view the transcript and show notes for this episode.