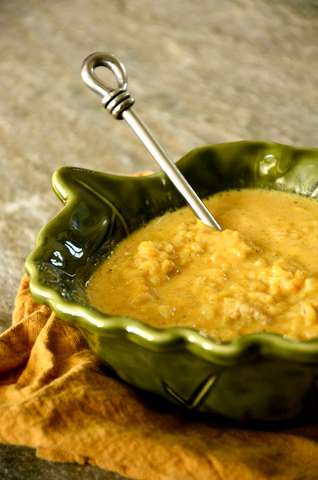 The pumpkin-themed recipe section that we published in the September/October 2011 issue of LDS Living (click here to see it online) has actually been in the works for several years. So, when it finally came time to run the recipes, we were thrilled and anxious to try them out for ourselves. Find out how it went down.

Pumpkin Curry Soup
Ashley Evanson, online editor
This soup is a-ma-zing. I made it twice, once with homemade canned pumpkin and the other with canned pumpkin from the store. Honestly, they were both delicious so the homemade stuff didn't make a difference. I'm all about big flavor so I added an extra bay leaf and a pinch more of each spice. The soup actually turned out to be more of a risotto, but you can add less rice if you want it more soup-like. My husband doesn't like pumpkin food (crazy, I know), but he went back for seconds of this curry soup. I highly recommend it.

Pumpkin Pancakes
Ashley Evanson, online editor
I substituted pumpkin pie spice for all of the spices, and used vanilla yogurt instead of plain. The pancakes turned out pretty good, but I think what made them a hit was the topping I used: apple pie jam. It created the perfect flavor combination with the pumpkin. I had a pancake with plain maple syrup (the cheap kind), and although good, it was nothing compared to the jam. Other topping options: apple butter, peach jam, REAL maple syrup, creme fraiche, or any combination of these.

Cherokee Pow Wow Stew
Whitney Sorensen, intern
As a college student, I generally avoid recipes that involve more than four ingredients or require a lot of chopping. I like to cook, but I hardly ever have ingredients on hand and onions make me cry. But the taste and aroma of this soup more than compensated for the minimal time and effort I put into creating it.  While I was chopping away, my roommates came home one by one and wondered aloud what the delicious aroma was. I had to agree: I couldn’t wait for a taste. When it finally came, I knew I would be making this stew again. Soon.

In this recipe, the pumpkin actually acts as part of the stew base, mixing with the beef broth and juice from the canned tomatoes for just the right texture. The recipe didn’t specify, so I chose a red onion for color and chopped all the vegetables rather roughly because I like plenty of crunch in every bite. But be aware, the potatoes will take a while to cook through. For a creamier soup, I added a dollop of light sour cream and some shredded cheese, but it tastes great without these extras.

Pumpkin Joes
Katie Barlow, intern
I’m not a fan of sloppy joes, but I do love pumpkin and was excited to see how this recipe would turn out. Although the pumpkin flavor was subtle, I could definitely tell these tasted different from regular sloppy joes. I loved the richer and more sophisticated flavor the pumpkin and spices added to it and felt this recipe was very easy to make.

I used a food processor to finely chop the onions, and I think that made them too small because they were imperceptible in the final product. My mom said she might have liked the recipe better without the pumpkin pie spice, and after having made it, I’d be curious to try it with different spices like allspice, ginger, and nutmeg minus the cinnamon. I ended up using closer to ¾ cup of pumpkin, which is more than the original recipe called for, because the chili sauce was very overpowering.

Overall I loved the recipe and suggest it to anyone who doesn’t like sloppy joes because it just might change their mind.

Pumpkin Alfredo
Kate Ensign-Lewis, online editor
I was super excited to make this because I’ve had great experiences with pumpkin, Parmesan, and pasta before (actually from that Iron Chef: Pumpkin thing I mention below). But, I have to admit, I was a little disappointed with the final product. This is probably more a function of my execution than of the actual recipe. I think I used the wrong kind of fresh pasta under the sauce (I opted for a sausage tortellini rather than a cheese ravioli, like Sara at Our Best Bites suggested), and also maybe from the Alfredo base I used (my own recipe, not Sara’s recipe). The pumpkin taste was subtle, so it wasn’t a bad taste, it was just a little lackluster. I didn’t have time to try the recipe again with different pasta or Alfredo, but I’m willing to give it a shot since I know what an awesome combo this is. I’ll let you know the results when I do.

Pumpkin Cookies
Kaela Worthen Gardner, associate editor
This is my mom’s recipe, and one of my most favorite dessert recipes of all time. These cookies are easy to make, and they’re ridiculously delicious. And best of all, they’re healthy!—for a cookie. The pumpkin makes you feel as if you’re not actually eating anything bad for you. Unfortunately, because of their semi-healthful qualities and not overpoweringly sweet and rich flavor, that also means I can easily gulp down a dozen of them in one sitting. It’s happened—too many times for me to be able to admit. Which probably negates all healthful benefits. If you want to make them even healthier, though, the recipe also works perfectly with whole wheat flour instead of white, and you can also replace the oil with applesauce (I would recommend only doing half and half though, as the texture gets sacrificed if you ditch the oil completely). In an attempt at stopping myself from consuming entire batches in single days, I have also frozen the cookies with great success. They thaw out perfectly (you know, like, 2 days after I’ve frozen them and I’ve already run out of the unfrozen ones and am still craving more).

Pumpkin Pie Milkshake
Erin Hallstrom, associate publisher
I am a recent convert to pumpkin pie—didn’t really like it until a couple years ago when I decided it was time to become a grown-up and learn to enjoy such an iconic dessert.  If only I had tried this shake earlier, then maybe I would have been a pumpkin pie devotee for much longer.  This shake brilliantly meshes the tastes of pumpkin pie with the best of all desserts (ice cream).  I made no changes to the recipe, and my only suggestion is to keep more graham crackers on hand to add when the top layer of the shake gets eaten.

Pumpkin Roll
Kate Ensign-Lewis, online editor
Sooo good. I actually made this several times when the Lion House first came out with their Lion House Bakery cookbook a couple years ago. I made it first after seeing the photo; then again when my husband requested we make it again; then again when we had an Iron Chef: Pumpkin cookoff with some friends for Halloween (which, by the way, is an awesome way to spend Halloween—but I digress). The pumpkin roll was amazing each time. Once you get the technique of turning out the cake onto a towel and rolling it up, it isn’t that hard. And the cream cheese frosting is TO DIE FOR. A definite must-make for fans of spice and cream cheese.