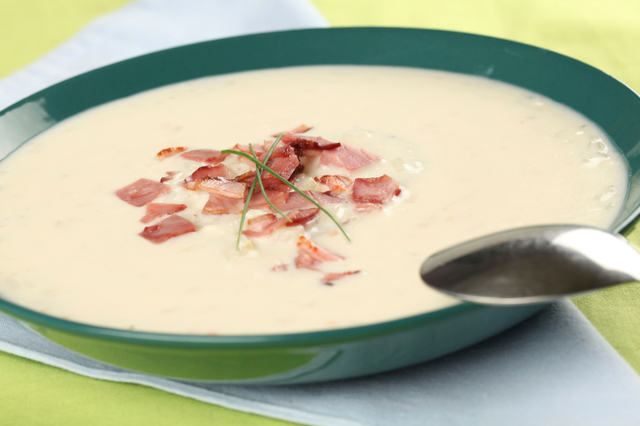 Recently we held our first official Corporate Soup Day to assemble a delicious collection of soups and a large body of people to vote on the best flavors. Next week the grand prize winner—which will receive a $100 gift certificate to Deseret Book—will be announced, so stay tuned!

Our first runner up was Creamy Potato Soup, from Debbie Judd of Evanston, Wyoming.

Place cubed potatoes in a large pot and cover them with water. Add salt for flavoring and bring to a boil. Cook until tender and remove the 3 cups of potato water to a separate bowl. Drain remaining water off potatoes.

While potatoes are boiling, cook bacon until golden brown. Reserve some of the drippings, add the onions, and cook until transparent.

In large saucepan, melt butter, and with a whisk stir in 1 cup of flour slowly to incorporate. Slowly add 2 cups milk into the roux mixture, making sure to stir constantly to avoid lumps. Slowly add sliced cream cheese to mixture, stirring until well blended. Add 1 cup milk, along with 1/2 cup sour cream, and incorporate into mixture. Slowly add up to 3 cups of reserved potato water. Sauce should be the consistency of a medium-thick gravy. Salt and pepper sauce to desired taste.

Mix together bacon, potatoes, onions, and cream sauce to serve. If there are leftovers, add extra water or milk when re-heating to achieve desired consistency. Makes approximately 14 servings.

For the other winners from our competition: