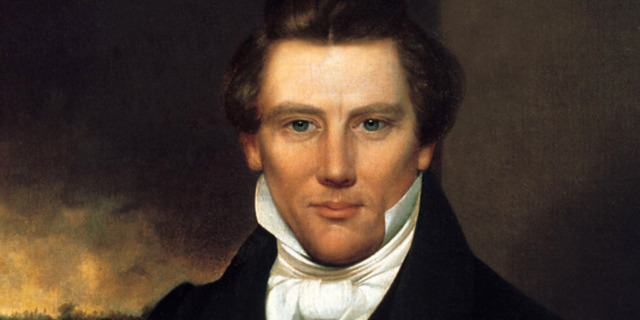 ‘God is my friend’: What we can learn from how Joseph Smith dealt with adversity

Joseph Smith was born to poor tenant farmers in Vermont. At age 38, he was shot by a mob, in a jail, in a small town in Illinois. In between, he faced so much adversity that his story is almost the stuff of myth. Around age 7, Joseph endured a painful leg surgery that required him to use crutches for several years. At 14, he was rejected and ridiculed when he reported on his First Vision to a minister. When Joseph was 17, his older brother Alvin died—one of four brothers who predeceased him. At 20, Joseph was criminally prosecuted for using a seer stone—the first of many times the law was used to harass him. When he was 22, his and Emma’s firstborn child died—the first of six children that they buried. At 25, he undertook the first of three migrations that forced him to start again with little. At 26, he was attacked and beaten. At 32, he was sentenced to death. Though he survived that peril, he languished in jail while his family and thousands of followers were driven out of their homes and exiled. At 36, he declared bankruptcy because he had taken on so much personal debt to build up the Church. In his final two years he rebuffed waves of legal and personal attacks, some from former friends, and started looking for places outside of the United States for his people to settle.1. Notwithstanding all this and more, he never turned against God, never denied his testimony that God and Christ had spoken to him, and never stopped preaching the gospel, building temples, and guiding the Saints.

An entire book could be written about the adversity Joseph faced and his response to it. In fact, responding to adversity with faith and fortitude may be the overarching theme of Joseph’s life. As with Paul, his New Testament hero, tribulation became second nature to Joseph, and he rejoiced in it because he knew that trials are necessary to prepare us for the glories to come.2 This essay explores only one aspect of Joseph’s experience with adversity: his willingness to obey God regardless of the circumstances.

Somehow, Joseph made up his mind early in his prophetic career that he would do whatever God asked him to do. This was perhaps partly in response to the rebuke he received from the Lord after he let Martin Harris borrow the first pages of the Book of Mormon translation. The Lord told Joseph his failing in that episode was fearing man more than God; had Joseph been faithful, God would have “extended his arm” and been with Joseph “in every time of trouble.”3 Joseph appears to have decided that he would never disappoint the Lord again. We may be inclined to think Joseph had an easier time obeying because of the visions he had seen. But many others who shared some of those marvelous experiences did not remain true. Joseph’s steadfastness must be found, rather, in his character.

Joseph’s obedience was not half-hearted, not of the All right, I guess I’ll do it variety. No, he responded to the Lord’s commands with alacrity, as historian Richard Bushman put it. Bushman was talking specifically about how, in the fall of 1832, Joseph and Newel K. Whitney set off from Ohio to New York City shortly after Whitney was commanded to travel there, even though Emma Smith was in the late stages of pregnancy and Whitney was still recovering from a leg injury earlier that year.4 Family and personal considerations seemed to hardly enter Joseph’s calculus after God told him to do something. (I am mindful that for nearly every challenge Joseph faced, Emma endured an accompanying trial—sometimes of a different sort, but no less sore. As you read the accounts in this essay about how Joseph met adversity, reflect on what they also reveal about Emma’s sacrifice, support, strength, and faith.)

Two other examples from the same period further demonstrate how remarkably prompt Joseph was to act on instruction from the Lord. In late 1830, Joseph and a group of Saints were living in New York, where most of them had homes, extended families, and work opportunities. On December 30, a revelation told Joseph to “go to the Ohio,” meaning to move with the Saints roughly 300 miles to eastern Ohio, where another small group of believers was living.5 If the Lord suddenly told me to uproot my family and move to a different state, how long would it take me to get there? Surely He would be all right with me taking time to get a good price on my home, tie up business, and say goodbye. But Joseph responded swiftly. He arrived in Kirtland, Ohio, in the middle of winter, on February 4, 1831. Emma bore twins three months later.6

An episode the following year showing Joseph’s alacrity has elements of both the heartbreaking and the incredible. The twins Emma bore in April 1831 both died at birth, and Joseph and Emma then adopted newborn twins, named Joseph and Julia, from a Church member whose wife had died.7 On March 1, 1832, as these twins approached their first birthday, Joseph was commanded to travel to Missouri, 900 miles away. Joseph had been there the prior summer to designate Independence as a gathering place for the Church. Now the Lord wanted him to return to counsel with the Saints.8 (Fortunately, in our own day, long trips away from spouses and children to carry out Church assignments are not generally required.)

► You may also like: Why do pandemics come and what is God’s role in them? Church historians discuss the topic

On March 20, Joseph received by revelation answers to two questions he had asked the Lord about the Missouri trip. In answer to the first question, Joseph was told to buy paper and take it to Missouri for the printing of the Book of Commandments. In answer to the other, he was instructed to set aside the New Testament translation for the time being and to proceed to Missouri with “no delays.”9 Four days later, Joseph and Sidney Rigdon were tarred and feathered by a mob outside their homes in Hiram, Ohio—a brutal attack intended to humiliate and warn. We have heard this story before, so perhaps it no longer seems remarkable to us that Joseph preached a Sabbath sermon the next day, with some of his assailants in the crowd.10 How many of us would have taken that day off? And now comes the part that to me is almost hard to believe, in showing both the amount of affliction Joseph was asked to suffer and how obedient he was. On March 29, five days after the tarring and feathering, the infant Joseph died a month shy of one year. He had been sick when his father was dragged outdoors by the mob, and exposure to the cold night air might have contributed to his death.11

Now, surely, the Prophet would take some time to grieve the loss and to recover from his beating? No. On April 1, presumably after the burial of his son, Joseph left Ohio for the long trip to Missouri.12 His responsiveness to the commandment of the Lord seems superhuman, but Joseph was only an ordinary person who had made up his mind to obey.

On the return trip from Missouri, Joseph’s traveling companion Newel Whitney broke his leg in a stagecoach accident. Though Joseph was anxious to return to Emma and their one surviving child, he delayed his return home for several weeks to help his friend recover.13 A letter Joseph wrote Emma during this time gives clues into the source of his uncommon fortitude. “I will endeaver to be Contented the Lord assisting me,” he wrote, after mentioning how unpleasant his situation was. “I will try to be contented with my lot knowing that God is my friend in him I shall find comfort I have given my life into his hands.” For Joseph, God was a friend who would assist and comfort him in any situation. And Joseph had also given his entire life over to God—not only pushing his own desires, fears, and welfare aside but letting them be completely swallowed up in whatever God asked. “I Count not my life dear to me,” Joseph told Emma.14 He meant it, as his martyrdom proved.

That Joseph was faithful to God even to the point of giving the last full measure of devotion encourages me to press forward and stay true even in times of extreme difficulty. In recent years I have dealt with a diagnosis of stage IV cancer, probably the greatest trial of my life. It can be hard to push anxiety and despair from my mind, to continue to perform my labors in family, Church, and occupation with optimism and determination. Serendipitously, my work as an editor for the Joseph Smith Papers means that Joseph’s example has been continually before my eyes. Thinking of his faith, his physical courage, and his steely resolve fortify me against what I must endure. Above all, Joseph points me directly to God, the only true source of comfort. I have felt that comfort!

When we do what God asks, when we search for Him, when we cry out for help, He provides the peace, strength, and guidance we need to make it through any adversity. I add my voice to that of Brother Joseph: God is our friend and is with us in times of trouble.

R. Eric Smith is the editorial manager and a general editor of the Joseph Smith Papers Project.

Over the past twenty years, more than 12,000 pages of scholarly research on Joseph Smith have been published as part of the Joseph Smith Papers, with thousands more being prepared right now. These pages are filled with insights into Joseph, but most have not yet been shared in a way that makes the accessible to a broader audience. This collection of short essays will help close this gap and bring insights into Joseph to Latter-day saints, both those who are struggling with questions about Joseph and those who simply want to understand the founding Prophet of the Restoration better. These essays look at Joseph Smith's life, character, personality, and relationships with others. Know Brother Joseph is an accessible and faith-promoting look at Joseph Smith, his life, and its relevance to us in our daily walk. Available now in Deseret Book stores and at DeseretBook.com.