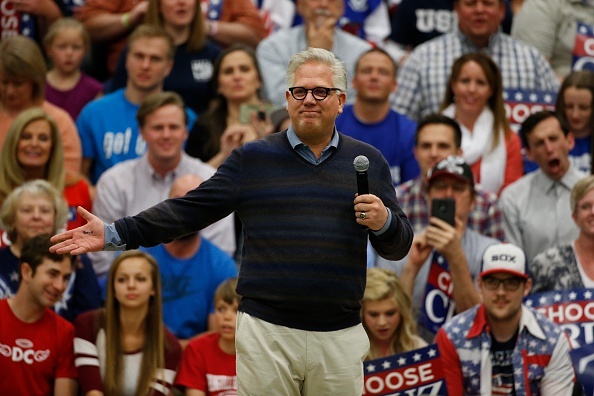 Glenn Beck was a teenager when his mother died by suicide. Having experienced depression as a boy, Beck recalls the oppressive grief and the feeling of inevitability that he would follow in his mother's footsteps. "You get to a place to where you think, 'Well, that's just in our blood. That's the way it works in our family, and I am going to repeat her mistakes,'" Beck says in the Good Morning America podcast Journeys of Faith with Paula Faris.

Later, Beck's brother-in-law also took his own life and the feeling that Beck was destined to follow his mother's footsteps intensified. Beck attempted to compensate for the misery that filled his life by chasing fame, money, and success. But by his 20s, Beck realized no amount of notoriety or wealth could make him happy. In fact, Beck began to pray to God to give him the strength to end his own life.

"Strangely I would pray, 'Help me do this Lord,'" Beck says. "'I can't take it anymore. . . . People would be better without me.'" These prayers soon became regular occurrences during his drive to and from work for eight months until Beck fundamentally believed he was unredeemable. "I felt broken. I felt poisoned. I really believed if you came in contact with me, you couldn't help but become sick yourself," Beck wrote of this time.

Since success didn't provide the escape Beck craved, he turned to marijuana and alcohol to dull his pain. In the podcast, Beck admits that he smoked marijuana every day for 15 years, from the time he was 15 into his 30s. He justified his dependence on alcohol by waiting until 5 p.m. to drink every day, but he counted down the minutes to when he could take that first sip, describing himself as a "high-functioning alcoholic."

Then, on his 30th birthday, literally as the clock flipped to midnight, Beck recalls a voice telling him, "Your life is about to change."

It was during this time that Beck hit "rock bottom"—he lost his wife, his job, and realized he had no real friends. In his isolation, Beck turned to his father, who helped him realize the toxic negativity that filled his thoughts from the moment he woke in the morning. During this time he also met the woman who would become his second wife, Tonya.

But it wasn't until Tonya refused to marry Beck that he finally turned toward God. Though Tonya loved Beck, she insisted she would not marry him, saying, "I know what won't work is a marriage without God at the center."

Though Beck had always believed in God and felt He had a prominent place in his life, Tonya helped Beck realize how God was not truly at the center of his family or life.

That realization led Beck on a journey to search out and investigate "everything" concerning religion and faith. Laughing, he even recalled attending a church where the pastor admittedly didn't believe in God.

"He called me up and said, 'So I hear you are seeking truth.' And I said, 'Pat, I know where you're going. There is no way I am going to a Mormon Church. No way!'" Beck recalls. "And he said, 'You don't know us at all. You have never— in a single service, you have never asked a question. . . . I thought you were actually turning over every stone, but if you're not really seeking and willing to look everywhere, that's up to you.'"

Beck couldn't live this challenge down. He decided to test out a Latter-day Saint worship service, telling his children and Tonya to talk to no one. He wanted to attend as little of the then-three-hour church service as possible to prove to his friend he was willing to look for God anywhere.

As he stepped into the chapel and was greeted by a cheery stranger, Beck remembers cynically thinking, "Nobody is that happy. Stop it!"

► You'll also like: How Glenn Beck Became a Latter-day Saint

While Beck wanted to escape after sacrament services, he recalls helpful members guiding them to Primary and Sunday School. When Beck learned he could ask any question he wanted during the gospel doctrine discussion, he raised his hand to ask a question that he thought would lead to Church members ushering him to his car and hoping he'd never return: "Where's Gandhi?"

One question had always frustrated Beck, and that was what happened to good people who didn't accept a particular religion—whether through opportunity or choice. So Beck wanted to know where Latter-day Saints thought someone as selfless as Gandhi would end up in the next life. The answer blew Beck away, and he quickly began searching out more books and information about Latter-day Saint doctrine, beliefs, and the plan of salvation.

While Beck admits that he didn't find the answer to every intricate question about life, heaven, and death, he said that everything he read made sense and everything pointed back to the core of his beliefs—that Jesus Christ knows us and died for us.

After being baptized a member of the Church, Beck said he "completely changed, literally the next day." The man who once fired an employee for bringing him the wrong pen, the man who hated himself and antagonized others, now felt the grace of God extending into every area of his life.

"I understand now the cry for mercy," Beck says.

Beck recalls a distinct, touching moment he shared with beloved Southern Baptist Minister Billy Graham. Both Beck and Graham suffered from a rare genetic eye disorder known as macular retinal dystrophy, and the two often talked together about their experiences, family, and faith.

"We were talking about some things, and he said to me, 'How do you know that?'" Beck recalls. "I said, 'I think I know it because of prayer.' And somebody said, 'Well, you know that he is a Mormon,' kind of throwing me under the bus, and he just turned and glared at that individual. And then he looked at me and he said, 'Tell me about your relationship with Christ.' And I did, and he had tears running down his eyes, and at the end he grabbed my hand and then he looked at that other individual and said, 'He sure sounds Christian to me.'"

When asked where he'd be without the Church and his faith today, Beck said emphatically, "I'd be dead. . . . Through Tonya, God saved me, and He saves me all the time. His scriptures have talked me off a ledge so many times."

For more about Glenn Beck's faith journey and his testimony of eternal marriage, the Word or Wisdom, and other gospel principles listen to the full podcast. To read more about his faith journey, check out "How Glenn Beck Became a Latter-day Saint."