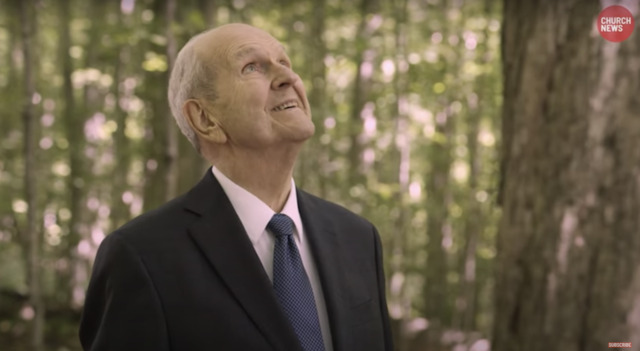 "He Looked Up to the Heavens": The Impressions Presidents Bingham, Jones Had While Watching President Nelson Film the Proclamation

On April 5, 2020, during the Sunday morning session of general conference, members of The Church of Jesus Christ of Latter-day Saints watched a prerecorded video of President Russell M. Nelson in the Sacred Grove.

But who was there to witness that recording and what were the thoughts and impressions of those in attendance? According to Church News, President Nelson invited two general officers of the Church to join him—President Jean B. Bingham and President Joy D. Jones. In a new Church News video, the presidents add their testimony to the prophet’s and share the “profound privilege” it was to be there on that solemn occasion.

“I remember prior to the filming beginning when President Nelson looked up—just for a moment—but he looked up to the heavens. And at that moment I thought, 'The heavens truly are just as open as they were when the Prophet Joseph was in that grove.' It was a tender experience to witness and to feel the Spirit that was there as President Nelson spoke those beautiful words. But I felt, even in the grove—even though it was a handful of people standing there with him—he was speaking to the world,” says President Jones.

► You may also like: What Are the 6 Proclamations that Have Been Issued in Church History?

In President Bingham's April 2020 general conference talk, "United in Accomplishing God's Work," she shared how she was able to sit down with President Nelson in the reconstructed home of Joseph and Emma Smith in Harmony, Pennsylvania, close to the location where the Aaronic priesthood was restored. During that conversation, President Nelson spoke about women’s role in the Restoration.

In the Church News video, President Bingham added her testimony of the prophet, reaffirming that the keys of the kingdom have been restored on the earth today.

“I thought, 'This is an absolutely remarkable experience to be listening to this proclamation about the Restoration that has impacted every single person who lives upon the earth delivered by our 95-year-old prophet who is strong and vital and has all the keys of the kingdom,'” she said. “That was a marvelous experience that I will never forget.”

WATCH THE VIDEO OR READ A NEW SERIES ON WOMEN OF COVENANT AT Church News.