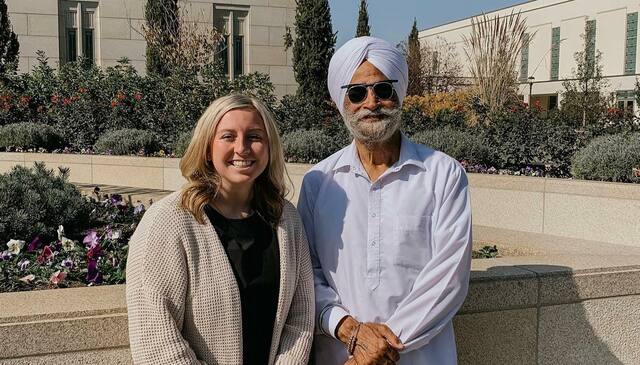 'He knew this was a spiritual place': How a Sikh man praying at the Ogden temple brought hope to Latter-day Saints

When 23-year-old Haleigh Barber visited the Ogden Utah Temple last week, she was not expecting to have an eye-opening interfaith experience.

The videographer was outside on temple grounds waiting for a bride and groom that had forgotten their marriage license, delaying the ceremony, when she noticed a Sikh man dressed in white praying outside the temple doors.

Barber was instantly intrigued by the man. During her mission in Taiwan, she had developed a love for other religions and cultures and she admired this man for being at the temple, even though he was of a different faith.

When she approached him and asked why he was there, he responded, “Because I love God.”

Originally from Amritsar, India, Kulwant Singh and his family moved to Ogden, Utah, about five years ago. He and his family are Sikh. Barber learned from talking to Singh that he knew this was a spiritual place, which is why he took off his shoes in front of the doors, knelt down, and prayed. He also greeted patrons exiting the temple doors and thanked them for loving God.

Barber explained, “While I was sitting there, I turned my shoulder and there was another man just walking across the temple grounds in a blue t-shirt that said ‘HOPE’ in huge letters. And I was like, ‘That’s it. That’s why this man is here. He’s here because he has so much hope in a higher being, in someone who could save him, who is merciful, who is kind.’”

Barber felt so moved by Singh's devotion and sincere love for God, she asked to take a photo with him and shared her experience on Facebook.

“I just thought it was so cool that this man, who knew nothing about our faith, went to a place he thought he could feel God, and that he was able to feel the blessings of the temple without even going inside. To me, that just shows how special the Spirit is just by going there. And I love that about Heavenly Father—that when I take a step toward Him, He comes running toward me. And that’s true in life, not just on the temple grounds. And I was like, ‘Oh my gosh, that is something everyone needs to know.’ That regardless of what you believe in, most people believe because of hope.”

► You may also like: ‘That they all may be one’: Building bridges of understanding with persons of other faiths

Other local members have seen Singh praying and greeting others on the temple grounds as well.

“I had the same experience a few months ago!” Darci Anderson wrote in a Facebook comment. “He was the cherry on top to a special wedding I had just attended. We were drawn to him and didn’t want to leave his presence. He is a blessing to those who go there.”

At the time of this article's publication, Barber’s post has had over 7,000 shares and nearly 500 comments.

One commenter wrote, “Beautiful. So refreshing to see people seeking things they have in common rather than differences that divide. Thank you for sharing your experience and the lesson that God is no respecter of persons. He loves us all equally and invites all to come unto Him. I love this beautiful man’s devotion to his Maker, and his willingness to worship. Truly an example to us all.”

Similar sentiments were shared in the comments such as “More of this in the world, please!” and “What a great experience to see,” and “I love this man already.”

In wrapping up her thoughts about her experience and her post, Barber shared, “I think this man has more faith and more hope than I do. I think Heavenly Father is so proud of him and just loves him. . . . That’s the thing I wish everyone understood—that you can still receive the blessings of the temple without going inside.”